A 12-year-old girl bitten on the leg by a shark in the Whitsunday Islands off the Queensland coast yesterday is due to be transferred to a Brisbane children's hospital. 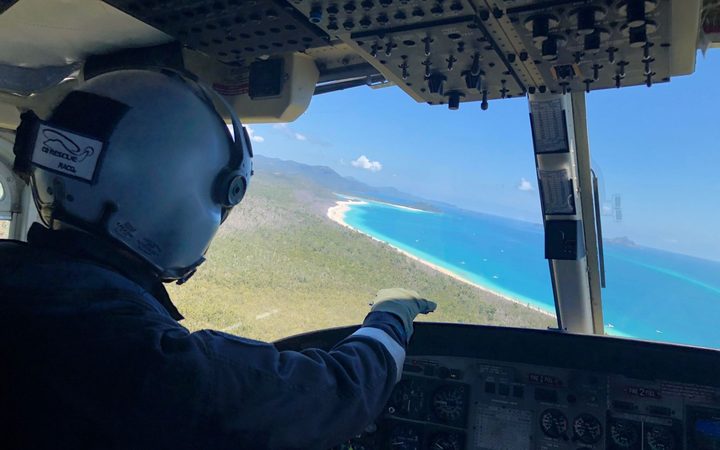 The girl was bitten on the thigh by a shark at Cid Harbour.

The ABC reports the 12-year-old is due to to be transferred from hospital in McKay to the Lady Cilento Children's Hospital in Brisbane today.

The girl was was intially reported as believed to be a New Zealander, but reports now say she may live in Victoria and have connections to New Zealand.

The RACQ CQ Rescue service said she had been travelling on board the vessel Miss Denero in the Whitsundays with her father and sister.

The rescue helicopter landed on the shore of Whitsunday Island and water police ferried the helicopter's doctor and paramedic out to the vessel Miss Denero.

The girl was bought back to shore in an inflatable where she was treated by the medical team for more than 20 minutes and given strong pain relief.

The girl's father was with her on the flight to McKay Base Hospital where she had emergency surgery on her injured leg.

Tracey Eastwick, an operations manager for Queensland Ambulance Service, said the girl remained conscious throughout the flight and received multiple blood transfusion among other fluids.

The 12-year-old had very large wounds and first-aiders did a wonderful job, Ms Eastwick said.

It's the second shark attack in the same area in 24 hours.

On Wednesday 46-year-old Tasmanian woman Justine Barwick was mauled on the leg in Cid Harbour and is in critical condition in Queensland.

She was also flown to Mackay Base Hospital.

Queensland Ambulance Service Rockhampton manager Mindy Thomas said they sent a helicopter from Mackay and a paramedic from Hamilton Island.

"We [had] two paramedics and a doctor on scene," she said.

Vision captured from the @cq_rescue chopper of the mission to rescue the second shark attack victim the Whitsundays. @7NewsBrisbane pic.twitter.com/R5XWzTEvKj

Thanks again to @cq_rescue as we pray that this poor little girl will be OK...like the 46-year-old lady who was attacked yesterday. #thankgodforracqcqrescue https://t.co/2HrgqvRyae

Nearby holidaymakers who witnessed the rescue of Justine Barwick said "there was blood everywhere".

Ms Barwick - who works for Family Based Care in north-west Burnie in northern Tasmania - was pulled out of the water and onto a nearby yacht, which happened to have a doctor on board.

She remains in a critical condition.

Fisheries Queensland shark control programme manager Jeff Krause said he had never seen anything like this happen in such a close geographical area.

Various types of whaler species, tiger and bull sharks are in the area.

Baited drum lines were being installed today to try to catch some of the sharks, and will stay the water over the weekend, to be re-evaulated next week, he said.