The United Nations aid chief says international aid agencies are losing the fight against famine in Yemen, saying the situation has deteriorated rapidly in recent weeks. 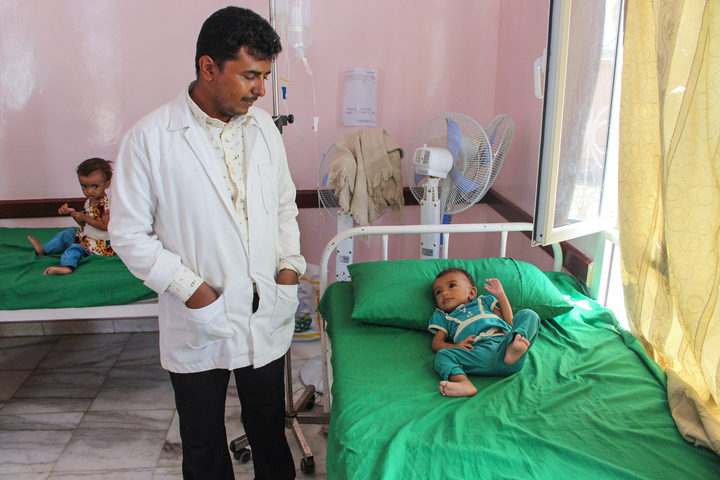 A Yemeni child suffering from malnutrition at a hospital in the northern district of Abs. Photo: AFP

Mark Lowcock has told the UN Security Council that 3.5 million people could soon be added to the 8m who already face starvation in Yemen - where a Saudi-led coalition is fighting Houthi rebels backed by Iran.

"We may now be approaching a tipping point beyond which it will be impossible to prevent massive loss of life as a result of widespread famine across the country.

"We are already seeing pockets of famine-like conditions, including cases where people are eating leaves because they have no other form of sustenance."

Rising food prices and the falling value of the country's currency as a result of a civil war are putting more families at risk of food insecurity.

But another threat comes from fighting around the key port city of Hudaydah, which is the principal lifeline for almost two-thirds of the population.

The Save the Children charity says a total of 5.2m children now face famine.

Yemen has been devastated by a conflict that escalated in early 2015, when the rebel Houthi movement seized control of much of the west of the country and forced President Abdrabbuh Mansour Hadi to flee abroad.

Alarmed by the rise of a group they saw as an Iranian proxy, Saudi Arabia and eight other Arab states intervened in an attempt to restore the government. They have received logistical and intelligence support from the US, UK and France.

At least 6660 civilians have been killed and 10,563 injured in the conflict, according to the UN. Thousands more civilians have died from preventable causes, including malnutrition, disease and poor health.

The fighting and a partial blockade by the coalition have also left 22m people in need of humanitarian aid, created the world's largest food security emergency, and led to a cholera outbreak that is thought to have affected 1.1m people.