A further one million children are at risk of famine in Yemen, the international non-governmental organisation Save the Children has warned. 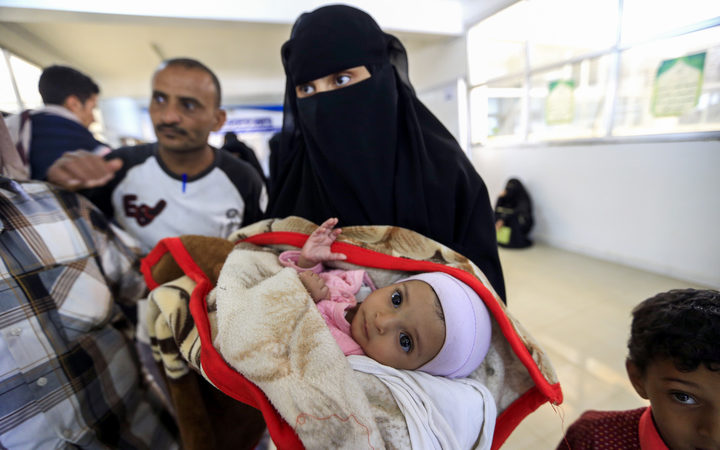 A Yemeni woman carries an ill child to receive treatment as the risk of famine looms in the country. Photo: AFP

Yemen has been devastated by a conflict that escalated in early 2015, when Houthi rebels seized control of much of the west of the country and forced President Abdrabbuh Mansour Hadi to flee abroad.

The Saudi Arabia-led coalition intervened militarily in an attempt to save the government, concerned by the rise of a group they saw as an Iranian ally.

Save the Children, which promotes children's rights internationally, said a total of 5.2 million children in Yemen now faced famine.

Rising food prices and the falling value of the Yemeni currency as a result of the conflict have put the more people at risk of food insecurity.

But another threat comes from fighting around the key port city of Hudaydah, which is the entry point for most aid to the country's rebel-held areas.

The basic supplies that pass through it are needed to prevent famine and a recurrence of a cholera epidemic that affected a million people last year.

The war has also led to severe delays in paying the salaries of teachers and public servants, with some people receiving no wages for almost two years.

Those who are paid face food prices which are 68 percent more expensive than when the war began.

Meanwhile, the Yemeni Riyal has lost almost 180 percent of its value over the same period, according to Save the Children.

Save the Children's concern

"Millions of children don't know when or if their next meal will come," the chief executive of Save the Children, Helle Thorning-Schmidt, said.

"In one hospital I visited in north Yemen, the babies were too weak to cry, their bodies exhausted by hunger.

"This war risks killing an entire generation of Yemen's children who face multiple threats, from bombs to hunger to preventable diseases like cholera," she added.

Earlier this month, Save the Children said it had treated almost 400,000 children under the age of five for severe malnutrition so far in 2018, warning that more than 36,000 children could die before the end of the year.