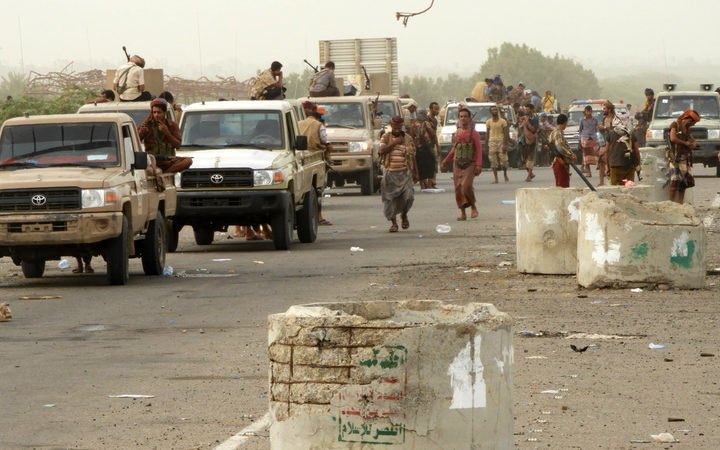 The coastal city of Hudaydah is where most of the aid arrives for people in Yemen's rebel-held areas. Agencies have warned of a humanitarian catastrophe.

About eight million people are at risk of starvation in the war-torn country.

Pro-government strikes began after Iranian-backed Houthi rebels ignored a deadline to withdraw by midnight (9am NZT) on Tuesday.

It is the first time the Saudi-led coalition of mostly Gulf states has tried to capture such a well-defended major city in Yemen.

The conflict has raged since late 2014, when the Houthis and allied forces seized north-western parts of the country, including the capital Sanaa, and eventually forced President Abdrabbuh Mansour Hadi to flee abroad.

Alarmed by the rise of a group they saw as an Iranian proxy, Saudi Arabia and eight other Sunni Arab states launched a military campaign in March 2015 to restore Mr Hadi's government.

The Saudi-led coalition has accused the rebels of using Hudaydah to smuggle in Iranian weapons. Both Iran and the rebels deny this.

The coalition says victory could break the stalemate in the war and force the Houthis to the negotiating table.

But the port is a lifeline for the majority of Yemen's population and the UN had been trying to get parties to the conflict to reach a deal that would avert an attack.

An estimated 600,000 people live in the area. Robert Mardini, regional head for the International Committee of the Red Cross (ICRC), said the attack was "likely to exacerbate an already catastrophic humanitarian situation".

On Friday, UN Humanitarian Co-ordinator for Yemen Lise Grande warned: "In a prolonged worst case, we fear that as many as 250,000 people may lose everything - even their lives."

On Tuesday, the exiled government said its forces and allied Saudi-led troops launched their assault after "exhausting all peaceful and political means".

The Saudi-owned Al Arabiya network reported "intense and concentrated" strikes near the port.

"The liberation of Hudaydah port is a turning point in our struggle to recapture Yemen from the militias that hijacked it to serve foreign agendas," the exiled government said.

The rebels have said they will "confront the coalition of aggression on all fronts".

About 10,000 people - two-thirds of them civilians - have been killed in the fighting since March 2015, according to the UN.

The vast majority of the casualties have been the result of coalition air strikes. The UN's figures do not include those who have died of disease and malnutrition.

The conflict and a partial blockade by the coalition have also left 22 million people in need of humanitarian aid. It has created the world's largest food emergency and led to a cholera outbreak that is thought to have killed 2,290 people.