Five people have been killed as Florence mauls the US East Coast, knocking out power for hundreds of thousands of homes and downing trees. 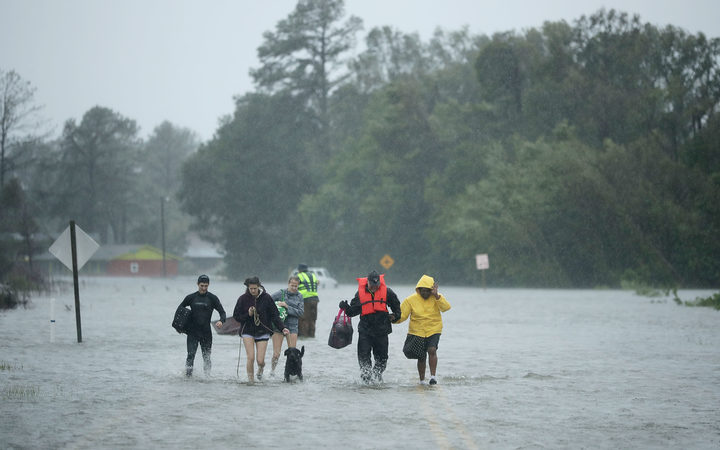 Volunteers from the Civilian Crisis Response Team help people to higher ground after rescuing them from their flooded homes during Hurricane Florence in James City, North Carolina. Photo: AFP

The weather event has been downgraded from a hurricane to a tropical storm but forecasters still warn of life-threatening storm surges.

Winds of up to 110km/h are also expected for several days as the weather system slowly grinds over.

Evacuation warnings have been in place for 1.7 million people in the area.

All five deaths were reported in North Carolina:

New Zealand's Ministry of Foreign Affairs and Trade has advised that there are currently 96 New Zealanders officially registered with SafeTravel as being in Virginia, Maryland, North Carolina, South Carolina, and Georgia.

What is the latest on the storm?

The storm originally made landfall at Wrightsville Beach, North Carolina, on Friday morning as a category one hurricane.

US officials say it remains extremely dangerous because of the risks posed by catastrophic flooding.

Forecasters say the storm surge, together with up to 3.5ft (1m) of rain over the next few days, could spawn a slow-motion disaster. 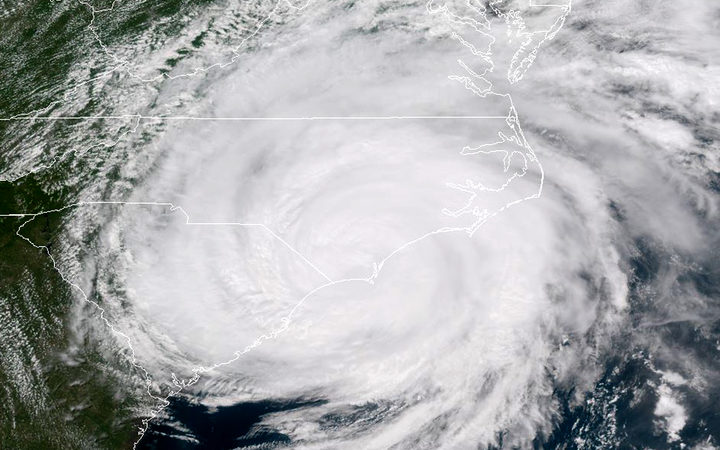 Some parts of North Carolina have already seen surges as high as 10ft (3m) in places.

Governor Cooper said the hurricane was likely to "continue its violent grind across the state for days".

Forecasters say it is now moving into eastern South Carolina, crawling along at just 3mph (4.8km/h).

It is expected to dump 18 trillion gallons of rainwater on US soil, meteorologist Ryan Maue tweeted.

Almost 800,000 people are reported to be without power already in North Carolina, and officials have warned restoring electricity could take days or even weeks.

How are residents coping?

More than 20,000 residents have packed into North Carolina emergency shelters, and officials have told those still in the storm's path to stay in place.

In Jacksonville, North Carolina, officials had rescued more than 60 people overnight from a hotel that was collapsing in the storm. 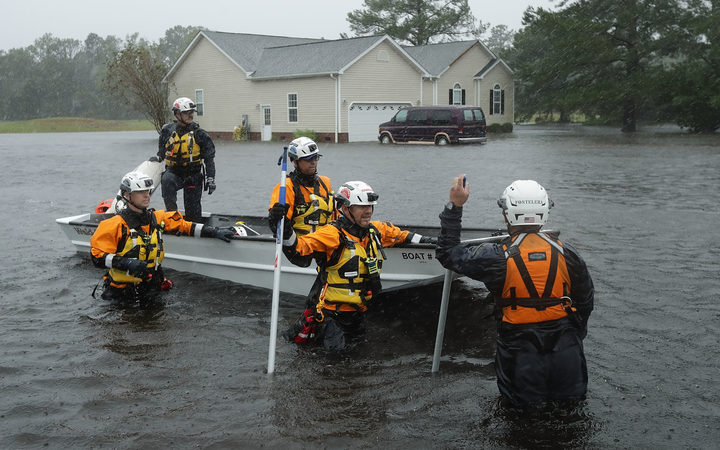 At least 200 householders in the riverfront city had to be plucked to safety by authorities.

Local resident Peggy Perry told CNN she was "stuck in the attic" along with three relatives.

"In a matter of seconds, my house was flooded up to the waist, and now it is to the chest," she added.

Officials have warned people against entering attics, so as to avoid drowning, unless they have a means to cut through to the roof.

The White House said on Friday that President Donald Trump would travel to the region next week unless his trip would disrupt clean-up and rescue efforts.