US President Donald Trump, facing a torrent of criticism over his summit with Russian counterpart Vladimir Putin, says he misspoke at a news conference and meant to say he saw no reason why it was not Russia that interfered in the 2016 US election. 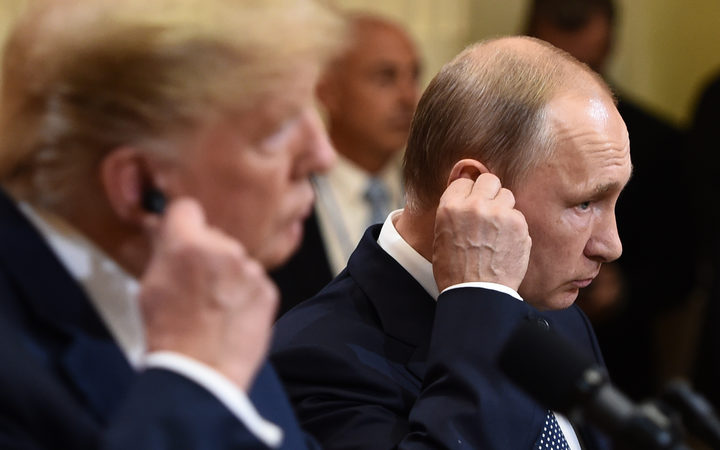 US President Donald Trump and Russia's President Vladimir Putin attend a joint press conference after a meeting at the Presidential Palace in Helsinki, on July 16, 2018. Photo: AFP

Standing alongside Putin at the news conference in Helsinki on Monday, Mr Trump was asked if he believed US intelligence agencies' conclusions that Russia interfered in the election in an effort to help him defeat Democrat Hillary Clinton.

Mr Trump said he was not convinced it was Moscow.

"I don't see any reason why it would be," Trump said. "President Putin was extremely strong and powerful in his denial today."

In a statement today Mr Trump said he meant to say 'I don't see any reason why it wouldn't be Russia'.

"I think that probably clarifies things," he said.

Mr Trump told reporters at the White House that he had full faith and support for US intelligence agencies and accepted their conclusion that Russia meddled in the election.

He said Russian actions had no impact on the outcome of the vote and the administration would work aggressively to protect the November 2018 congressional elections.

He said the meeting with Mr Putin had gone "even better" than the recent Nato summit.

In a tweet, Mr Trump alluded to last week's Nato summit, which ended with him saying he had secured extra money for defence - something disputed by allies in the Western military alliance.

While I had a great meeting with NATO, raising vast amounts of money, I had an even better meeting with Vladimir Putin of Russia. Sadly, it is not being reported that way - the Fake News is going Crazy!

What did he say at the summit with Putin?

On Monday the US and Russian presidents held nearly two hours of one-on-one talks without their advisers in the Finnish capital Helsinki.

At a news conference afterwards, Mr Trump was asked if he believed his own intelligence agencies or the Russian president when it came to allegations of meddling in the 2016 presidential election.

"President Putin says it's not Russia. I don't see any reason why it would be," he replied.

The US president was also asked whether he held Russia accountable on any particular issue.

He declined to offer specific criticism, but said: "I think we've all been foolish. We should have had this dialogue a long time ago... And I think we're all to blame."

Mr Trump's comments put himself out of step with US intelligence agencies, which concluded that Russia was behind an effort to tip the 2016 US presidential election against Democratic candidate Hillary Clinton, with a state-authorised campaign of cyber-attacks and fake news stories planted on social media.

Top administration officials have accepted this conclusion, such as former CIA director Mike Pompeo who is now Mr Trump's secretary of state.

Some US politicians had called for the summit to be cancelled after 12 Russian military intelligence agents were indicted last week, accused of hacking Mrs Clinton's election campaign.

Aside from questions over the election, the US and Russia remain far apart on major issues, such as the Syria conflict, Russia's annexation of Crimea, and the US backing for the UK over the poisoning of a former Russian spy.

In their response, many US politicians simply refused to accept an equivalence between the US and Russia.

Republican House Speaker Paul Ryan said there was no doubt Russia had meddled in US elections and that Mr Putin "does not share our values".

Another senior Republican, Senator John McCain, said it was "one of the most disgraceful performances by an American president in memory".

Trump ally Newt Gingrich said the comments were the "most serious mistake of his presidency", urging him to clarify.

Mr Trump's former communications director Anthony Scaramucci told CNN the "optics are bad" and "he has to reverse course immediately".

However, Mr Trump found support from Republican Senator Rand Paul, who blamed "Trump derangement syndrome" for the criticism - prompting a supportive tweet from the president himself.

Thank you @RandPaul. “The President has gone through a year and a half of totally partisan investigations - what’s he supposed to think?”

At the summit, Mr Putin again denied meddling in the US election, and in a later interview dismissed longstanding reports that Russian intelligence may hold compromising material on Mr Trump.

The Russian president has won praise at home, with one tabloid saying he had "outmanoeuvred" the US president at the summit.