The US has rebuffed high-level pleas from the European Union to grant exemptions to European companies from its sanctions against Iran. 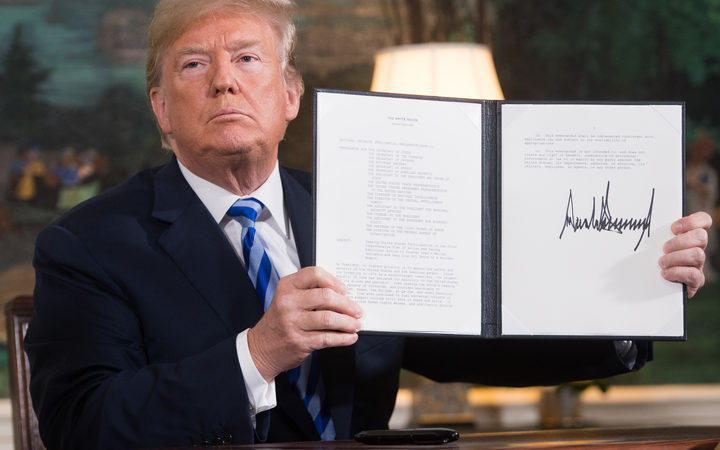 US President Donald Trump signs a document reinstating sanctions against Iran after announcing the US withdrawal from the Iran Nuclear deal. Photo: AFP

In a letter to European nations, Secretary of State Mike Pompeo said the US rejected the appeal because it wants to exert maximum pressure on Iran.

It said exemptions would only be made if they benefited US national security.

The EU fears that billions of dollars' worth of trade could be jeopardised as a result of Washington's new sanctions.

"We will seek to provide unprecedented financial pressure on the Iranian regime," the letter, which was also signed by Treasury secretary Steven Mnuchin, said, according to NBC news.

It added that the US is "not in a position to make exceptions to this policy except in very specific circumstances".

The strict sanctions were imposed in May after President Donald Trump withdrew from the 2015 international agreement on Iran's nuclear programme.

The US withdrawal meant sanctions that were in place prior to the agreement were re-imposed.

Its opposition to the deal is at odds with that of France, Germany and the UK, which have pledged their commitment to it.

Some of Europe's biggest firms rushed to do business with Iran after the nuclear deal took effect three years ago.

Now, European businesses are worried that their ties with the US could be damaged if they continue doing Iranian deals.

But earlier this year, the EU began reviving legislation that it said would allow its companies to continue doing business with Iran.

The so-called "blocking statute" was introduced in 1996 to circumvent US sanctions on Cuba but was never used.

An updated version of the measure should be in force before 6 August, when the first sanctions take effect.