US President Donald Trump has defended Russia over claims of interference in the 2016 presidential election. 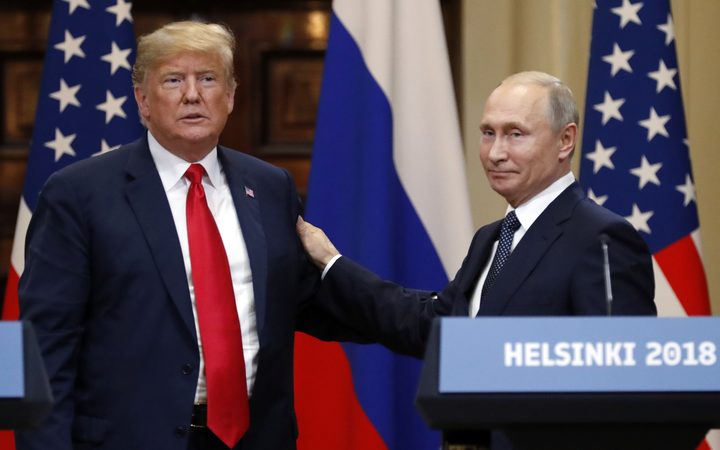 After face-to-face talks with Russian President Vladimir Putin, Mr Trump contradicted US intelligence agencies and said there had been no reason for Russia to meddle in the vote.

Mr Putin reiterated that Russia had never interfered in US affairs.

At a news conference after the summit, Mr Trump was asked if he believed his own intelligence agencies or the Russian president when it came to the allegations of meddling in the elections.

"President Putin says it's not Russia. I don't see any reason why it should be," he said.

US intelligence agencies concluded in 2016 that Russia was behind an effort to tip the scale of the US election against Hillary Clinton, with a state-authorised campaign of cyber attacks and fake news stories planted on social media.

Some US politicians had called for the summit to be cancelled after 12 Russian military intelligence agents were indicted last week by US special counsel Robert Mueller, accused of hacking the presidential campaign of Democratic candidate Hillary Clinton.

Mr Putin offered to allow US investigators to visit Russia to question the officers.

He made it clear that, in return, Russia would want similar access to people in the US it suspects of criminal activity.

The US President said Mr Putin had been "extremely strong and powerful in his denial" of any election meddling.

Mr Putin described the Helsinki meeting as "candid and useful" while Mr Trump said there had been "deeply productive dialogue".

US-Russia relations had "never been worse" than before they met but that had now changed, Mr Trump said.

Both leaders also said they would work together to help resolve the Syrian crisis. The US and Russia back opposing sides in the eight-year-old civil war.

"Our militaries have gotten along better than our political leaders for a number of years and we get along in Syria too," Mr Trump said.

He said the US wanted to increase humanitarian aid to the Syrian people.