The US Department of Justice has charged 12 Russian intelligence officers with hacking Democratic officials in the 2016 US elections. 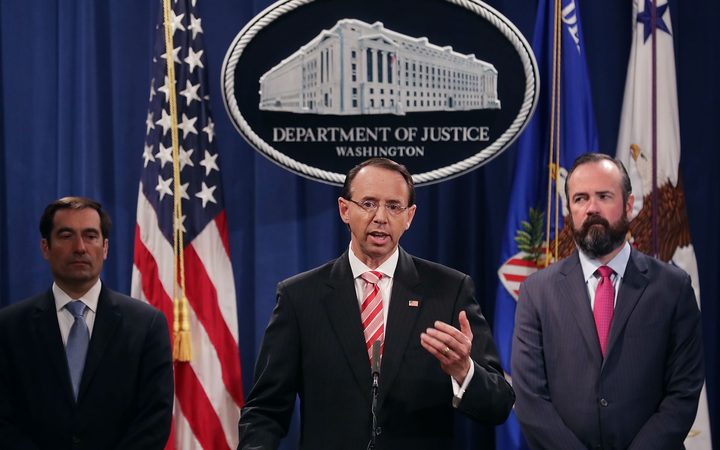 He said the hackers also stole data on half a million voters from a state election board website.

The Kremlin said there was no evidence linking the 12 to military intelligence or hacking.

The claims were "an old duck" and a "heap of conspiracy schemes", said Moscow's foreign ministry in a statement.

The indictment was the first by US officials to directly charge Russia's government with meddling in the US vote two years ago.

What are the allegations?

The 11-count indictment names the Russians defendants, alleging they began cyber-attacks in March 2016 on the email accounts of staff for Hillary Clinton's presidential campaign.

Mr Rosenstein said the defendants corresponded with several Americans during the alleged conspiracy, but added there is no allegation that any US citizen committed a crime.

They also plotted to hack into the computers of state boards of elections, secretaries of state, and voter software, according to the indictment.

Mr Rosenstein said: "We know that the goal of the conspirators was to have an impact on the election."

The deputy attorney general said all 12 defendants were in the Russian intelligence service, the GRU.

What did the hackers find out?

The DNC leak showed that top Democrats preferred Mrs Clinton for the presidential nomination, which confirmed the worst fears among supporters of her liberal challenger, Bernie Sanders.

President Donald Trump was briefed about the indictments earlier in the week.

He is currently in the UK, from where he once again dismissed the investigation as a "rigged witch hunt".

Next week he will meet with Russian President Vladimir Putin at a summit in Helsinki, Finland.

Senate Democratic leader Chuck Schumer has urged the president to cancel that meeting, in light of the indictment.

Special Counsel Robert Mueller is investigating US intelligence findings that Russians conspired to tilt the election in Mr Trump's favour, and whether any of his campaign aides colluded.

As of Friday, the inquiry has indicted 32 people - mostly Russian nationals in absentia - as well as three companies and four former Trump advisers.

None of the charges allege Trump advisers colluded with Russia to interfere with the presidential campaign.