Opinion - "Hey James, me and Janey Godley are going to Trump's Golf Course tomorrow to tell him to F**k off. Ye wanna come?" 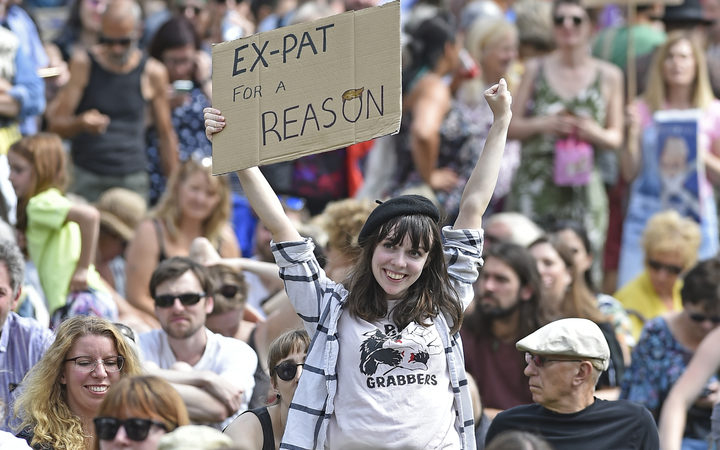 That's how I found myself in a small car with Irish comedian Martin Mor, at 6am on a Saturday, driving from Edinburgh to Glasglow to pick up Scottish Comedy legend, Janey Godley, on the way to Turnbury; a small coastal village with one major feature - a golf course owned by President Donald Trump.

Janey had come to international attention at Trump's last Scottish visit by showing up at Turnbury with a simple sign: "Trump is a C**t" (I've added the stars).

Now the "C bomb", to be fair, flows much more freely in Scotland, than in New Zealand, and definitely more freely than in the United States.

Ask Janey and she would tell you it wasn't just a statement from her but, as she saw it, from women around the world, delivered with that magnificent Glaswegian scowl, to a man who constantly demeaned women.

The police were under instructions to confiscate any signs with abusive language, as Trump was no longer just a robber baron with presidential aspirations, but a world leader with all the complications that involved.

We knew about those instructions because Janey had been chatting with them via email. They didn't want anything violent to go down, and I heavily endorsed that result. Especially when we showed up to find there were hundreds of police - many who were back from cancelled leave - forming a physical perimeter around the golf course. There were mounted police and snipers in a scaffolding tower too.

And so that was the time we went and protested Donald Trump while he played golf... many nations, one very similar message pic.twitter.com/YSrYzo513K

London's protest had 250,000 people. Because we'd gotten up at 6am, we were the first ones there. A Kiwi, an Irishman and a Scotswoman walk toward a police line ...

Janey had made a new sign: "Trump is a runt". Write that out, cover the bottom of the "r", and you'll see her cunning and perfectly legal plan. Martin, with wonderfully cutting Irish understatement, had a sign reading "Donald Trump is not nice".

It is the most violent word in the Samoan language. It's worse than the C bomb and recognised throughout the Pacific as a quick way to starting a fight with a Samoan.

I wanted Pacific people to see someone was there sneakily swearing at a symbol of colonial oppression. I also wanted non-Pacific people to go, "Did he mean Covfefe?" And then find out about the Pacific and the United States.