The US is to impose tariffs on steel and aluminium imports from allies in Europe and North America. 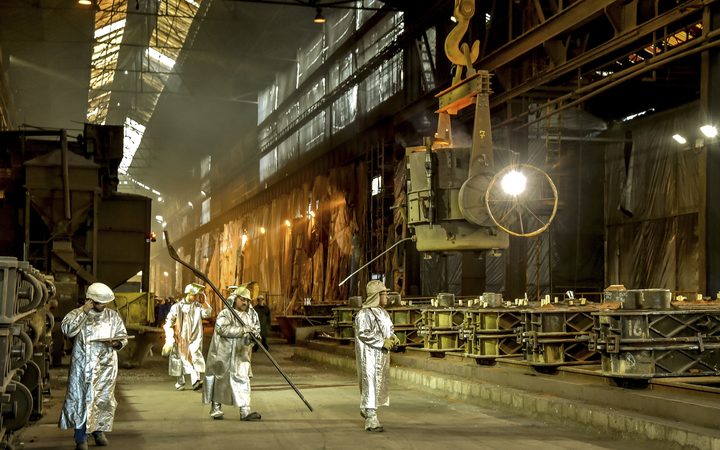 The move immediately triggered vows of retaliation from Mexico and the EU, which called the tariffs "protectionism, pure and simple".

The UK said it was "deeply disappointed" by the US decision, which followed weeks of negotiations.

The EU had "no choice" but to bring a case before the World Trade Organization and impose duties on US imports, he added.

Europe had previously outlined a list of items, including US bourbon, cranberries and jeans, as potential targets for retaliation.

Mexico's Economy Ministry said it would place tariffs on items such as steel, pork legs and shoulders, apples, grapes, blueberries and cheese.

US President Donald Trump announced plans for tariffs on foreign steel and aluminium in March, justifying them on national security grounds.

Since the announcement South Korea, Argentina, Australia and Brazil have agreed to put limits on the volume of metals they can ship to the US in lieu of tariffs.

The US granted temporary exemptions to the EU, Canada and Mexico amid negotiations over limits. That deadline was due to expire on 1 June, having already been extended by a month.

US Commerce Secretary Wilbur Ross announced the sanctions from Paris, where he had been negotiating with EU leaders who were trying to avert the tariffs.

Mr Ross said talks had not made enough progress to warrant a further reprieve either for Europe or for Canada and Mexico, which are in negotiations with the US over North America's free trade agreement.

Mr Trump has the authority to lift the tariffs or alter them at any time, he added.

"We continue to be quite willing and indeed eager to have discussions with all those parties," Mr Ross said.

Since Mr Trump's announcement in March, companies in the US that buy metals have already reported higher steel prices and and complained that US producers do not have the ability to meet demand.

Economists and US companies have warned that higher metal costs will disrupt supply chains and eventually get passed on to US households. They said the tariffs are likely to lead to job losses at firms that rely on the materials.

Goldman Sachs in March that estimated that the tariffs would boost inflation by less than half a percentage point.

Mr Ross has dismissed the concerns about higher costs, arguing that the effects will be minimal.

Shares of US steel producers gained in trading on Thursday, while companies that rely on the metals, such as Caterpillar and Boeing, declined.

UK producers, like those in mainland Europe, are worried the tariffs will cause a decline in US demand, while prompting a surge in steel imports diverted from the US.

The UK steel industry employs about 31,000 people and sends about 7 percent of its exports to the US, according to the organisation.

Mr Stace said it was "correct" for the EU to pursue safeguards, but urged the countries to find a common solution that addresses the "root cause" of the issue.

UK business lobby group the CBI also called the tariffs "deeply concerning" while calling on the parties to be cautious, given the potential costs of a trade war.

Ben Digby, CBI's international director, said: "These tariffs could lead to a protectionist domino effect, damaging firms, employees and consumers in the US, UK and many other trading partners.

"Now is not the time for any disproportionate escalation, and we urge the EU to consider this when initiating its response," he added.

The tariffs have faced sharp criticism in the US from businesses and lawmakers, including Republicans typically allied with the president.

Republican Kevin Brady, who shepherded last year's tax cut through Congress and chairs the House Ways and Means Committee, called on the administration to reinstate the exemptions.

He said: "The administration will need to come to Capitol Hill to provide answers about the indiscriminate harm these tariffs are causing our local businesses."

The US Aluminum Association, which represents major producers, also criticised the US decision on Thursday, saying tariffs would alienate allies and fail to address oversupply.

Europe, Canada and Mexico say that as close allies of the US they should receive exemptions from the measures.

The UK said: "We will continue to work closely with the EU and US Administration to achieve a permanent exemption, and to ensure that UK workers are protected and safeguarded."

Mexico said its retaliatory duties on US imports would be in place for as long as the US duties.

China has already imposed duties on $3 billion worth of US goods in retaliation for the steel and aluminium tariffs.