Donald Trump has once again changed his position on the Trans-Pacific Partnership trade deal days after just days ago raising the prospect he might consider rejoining the free trade agreement. 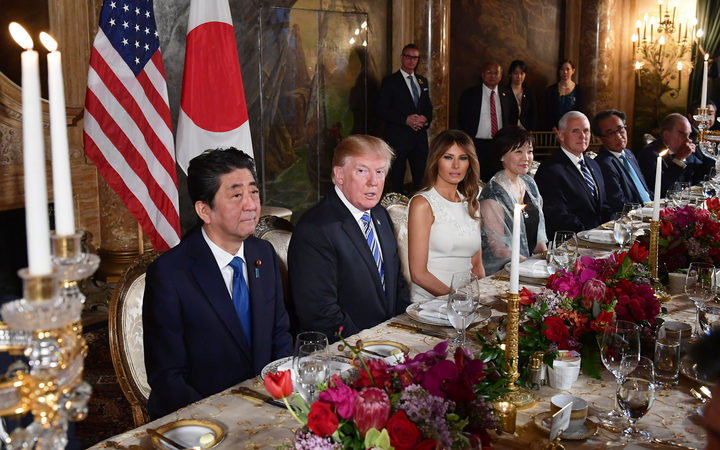 Trump reaffirmed his desire at the news conference to address trade imbalances with Japan, saying he preferred one-on-one talks to negotiate a bilateral deal aimed at trimming the US trade deficit.

While the leaders said they had agreed to have top advisers pursue talks, Abe made clear that differences remained in each country's approach.

"On the US side, they are interested in a bilateral deal," Abe told reporters. "Our country's position is that TPP is the best for both of our countries," he added.

The TPP was sought by former Democratic President Barack Obama. Trump abandoned it during his first weeks in office, saying it was not a good deal for the United States.

"I don't want to go back into TPP, but if they offered us a deal that I can't refuse on behalf of the United States, I would do it," Trump said.

Trump and Abe said on Wednesday (Thursday NZT) they had agreed to intensify trade consultations between the two longtime allies, with an aim to expand investment and trade between their countries.

"President Trump and I agreed to start talks for free, fair and reciprocal trade deals," Abe said at a joint news conference with Trump.

He said the tariffs had brought many countries to the negotiating able and that he may take them off of steel and aluminum imported from Japan if the two countries can come to a trade agreement.

The Trump administration granted temporary tariff exemptions to several other US allies but not Japan. Just after the tariffs took effect, South Korea agreed to a permanent steel exemption in exchange for a new quota that effectively cuts its steel shipments by 30 percent.

Abe said that Japanese steel and aluminum did not "exert any negative influence" on US security.

"It's our position that the quality of Japanese products is high and many of these products are difficult to be replaced with. They are greatly contributing to US industries and employment," Abe said.