China and the US say they will halt imposing punitive import tariffs, putting a possible trade war "on hold". 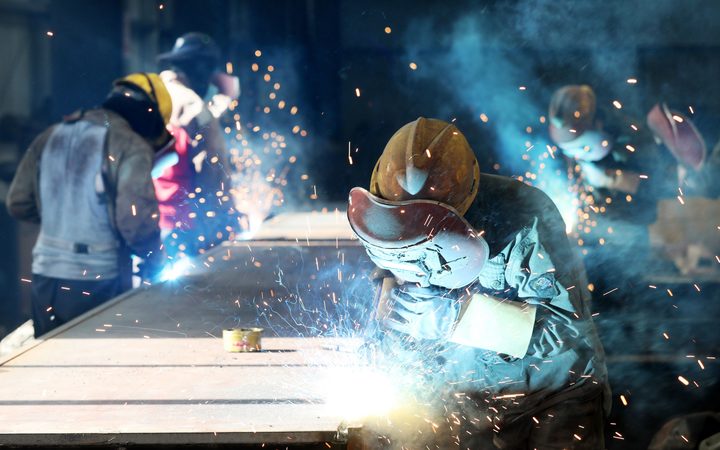 A worker cuts steel at a factory in Huaibei in China's eastern Anhui province. Photo: AFP

The deal came after talks in the US aimed at persuading China to buy $US200 billion of US goods and services and thereby reduce the trade imbalance.

US Treasury Secretary Steven Mnuchin did not give figures, but said the US would impose tariffs worth $150 billion if China did not implement the agreement.

Chinese Vice-Premier Liu He described the deal as a "win-win choice".

He said dialogue was the way to resolve such issues and "treat them calmly" in the future.

The US has a $335b annual trade deficit with Beijing.

Before being elected, President Donald Trump had spoken of China "raping" the US, and promised to label it a currency manipulator on his first day in office.

This did not happen, but he ordered a review of the trade imbalance last August. It found a range of "unfair" practices in China, including restrictions on foreign ownership that pressured foreign companies into transferring technology, unfair terms on US companies, Chinese investments in US strategic industries and Chinese cyber-attacks.

Beijing threatened equal retaliation, including tariffs on a number of US imports - among them aircraft, soybeans, cars, pork, wine, fruit and nuts.

Two days of talks ended in Washington DC on Friday with a framework agreement.

Mr Mnuchin told Fox News on Sunday that China would buy more US goods "to substantially reduce the trade deficit".

Concrete numbers had been agreed, he said, although he refused to disclose if this meant China was buying $200bn in return for the US threat to be lifted. US Commerce Secretary Wilbur Ross would travel to China soon, he said, to work on details, which would involve industries - not just the two governments.

"We are putting the trade war on hold. Right now we have agreed to put the tariffs on hold while we try to execute the framework" of the agreement, Mr Mnuchin said.

But he warned that failure to implement it would result in the imposition of the threatened US tariffs.

Chinese vice-premier Mr Liu said his visit to the US had been "positive, pragmatic, constructive and productive".

He described a "healthy development of China-US economic and trade relations" which would result in enhanced co-operation in areas such as energy, agriculture products, healthcare, high-tech products and finance.

"Such co-operation is a win-win choice as it can promote the high-quality development of the Chinese economy, meet the people's needs, and contribute to the US effort to reduce its trade deficit," he added.

And, perhaps because of that, he said the two countries "should properly handle their differences through dialogue and treat them calmly in the future".