It is North Korean leader Kim Jong-un's "fixed will" that a summit with US President Donald Trump in Singapore should go ahead, state media say. 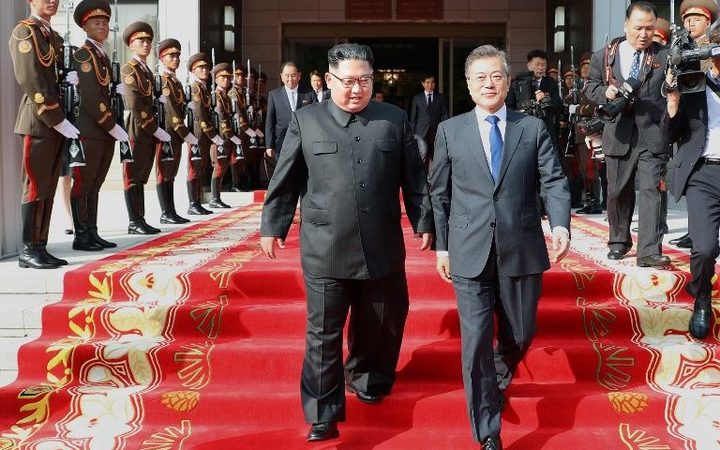 South Korea's President Moon Jae-in (R) and North Korea's leader Kim Jong Un (L) walking together after the summit at the north side of the truce village of Panmunjom in the Demilitarized Zone dividing the two Koreas. Photo: AFP

Mr Trump had cancelled the 12 June summit citing North Korea's "hostility" - but on Saturday he said things were "moving along very nicely".

Meanwhile US officials are reported to have travelled to the North on Sunday.

The American team, led by Sung Kim, a former ambassador to South Korea, was due to hold talks with North Korean Vice-Foreign Minister Choe Son-hui on preparations for the summit, US and South Korean media say.

The meeting would be the culmination of diplomatic efforts that began this year to try to defuse what had threatened to become a military confrontation between the nuclear-armed communist North and the South and its US ally.

The North's KCNA agency released a detailed statement on the meeting and the South Korean president also delivered remarks. It was the leaders' second meeting in as many months.

Mr Moon said he and Mr Kim had "agreed that the 12 June summit should be held successfully" and that the North Korean leader had "again made clear his commitment to a complete denuclearisation of the Korean peninsula".

But Mr Moon suggested Mr Kim was not certain whether Washington could guarantee the stability of his regime.

"What Kim is unclear about is that he has concerns about whether his country can surely trust the United States over its promise to end hostile relations," Mr Moon said.

The KCNA statement said the two leaders had had a "candid dialogue" and that Mr Kim had "expressed his fixed will on the historic... summit talks". He had called for co-operation to "establish a mechanism for permanent and durable peace" and the opening of a "new era of reconciliation and unity".

It added that "top leaders" from the two nations would hold more talks on Friday.

At the White House late on Saturday he said: "It's moving along very nicely. We're looking at June 12 in Singapore. That hasn't changed."

He also took to Twitter to angrily dismiss media speculation that the summit, even if reinstated, could not now be held in Singapore in the existing time frame:

The White House confirmed that an advance team of officials would leave for Singapore this weekend, as originally scheduled, to prepare for the possible summit.

Mr Trump had declared the summit cancelled on Thursday, blaming North Korea's "tremendous anger and open hostility", but then tweeted on Friday that "very productive talks" had taken place with the North.