The leaders of North and South Korea have met in the demilitarised border area between the two countries. 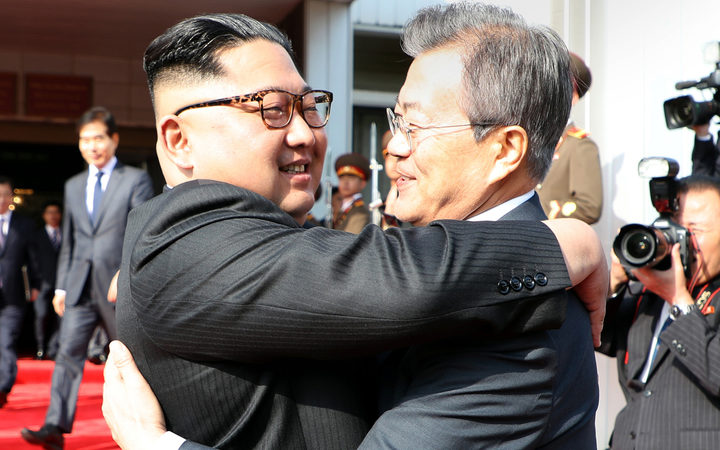 The meeting is only the second between South Korea's Moon Jae-in and the North's Kim Jong-un.

It comes as the two sides continue efforts to put a historic US-North Korea summit back on track.

US President Donald Trump cancelled the summit, scheduled to be held in Singapore on 12 June, but later suggested it might still go ahead.

The latest talks were held on the northern side of the Panmunjom truce village, between 3pm and 5pm local time, Mr Moon's office said.

"Both leaders exchanged opinions... for the successful holding of the North Korea-US summit," it added, saying that Mr Moon would announce the outcome of the talks on Sunday morning.

In Washington, Trump administration spokeswoman Sarah Sanders confirmed that an advance team of White House and Department of State officials would leave for Singapore this weekend, as originally scheduled, to prepare for a possible summit there.

The talks between Mr Trump and Mr Kim, if they were to go ahead, would be focused on ways of denuclearising the Korean peninsula and reducing tensions.

"We're gonna see what happens. We're talking to them [North Korea] now. It was a very nice statement they put out," Mr Trump told reporters at the White House in Washington.

He was referring to comments from the North's Vice-Foreign Minister, Kim Kye-gwan, who said that Mr Trump's decision was "unexpected" and "extremely regrettable", adding that Pyongyang was willing "to sit face to face at any time".

While Mr Trump said in a letter addressed to Mr Kim that he had cancelled the "long-planned" meeting "for the good of both parties", he also said that "wonderful dialogue" had recently taken place and that he was still looking forward to meeting the North Korean leader.

While the goal of both sides is said to be denuclearisation, what this actually means to Pyongyang and Washington appears to differ.

US officials have said they would like to see the complete and irreversible dismantling of the North's nuclear programme and weapons, allowing international inspectors to check every step of that process, before any talk of sanctions being lifted.

For North Korea, denuclearisation means a much more reciprocal agreement. If Pyongyang were to give up its nuclear assets, it would like to see a comparable gesture from Washington.

The US has a large military presence in South Korea and in Japan - both of which North Korea would expect to be scaled down. It also wants assurances that its survival as a state would never be in question.

Doubt was cast over the scheduled summit when North became angered by comments from senior US officials, who made comparisons with Libya. There, former leader Colonel Gaddafi gave up his nascent nuclear programme only for him to be killed by Western-backed rebels a few years later.

In April, the leaders of both Koreas held a historic meeting at the border, promising to end hostilities and work towards the denuclearisation of the Korean peninsula.

The rare dialogue - the first time the Korean leaders met to hold talks since 2007 - came after months of improving relations between the two countries.

At the carefully choreographed meeting, Mr Kim said that he wanted to "write a new chapter" for the region's troubled history. "New history starts from now, at the historic starting point of an era of peace," he said.

Future economic co-operation between the Koreas was also discussed, and Mr Kim admitted to Mr Moon that the North's critical infrastructure was in need of improvement.

Such projects are likely to have suffered under international and US sanctions, imposed on the North as a reaction against its nuclear programme and missile tests.