US President Donald Trump has said there is a "substantial chance" a historic summit with North Korea's Kim Jong-un next month may be delayed. 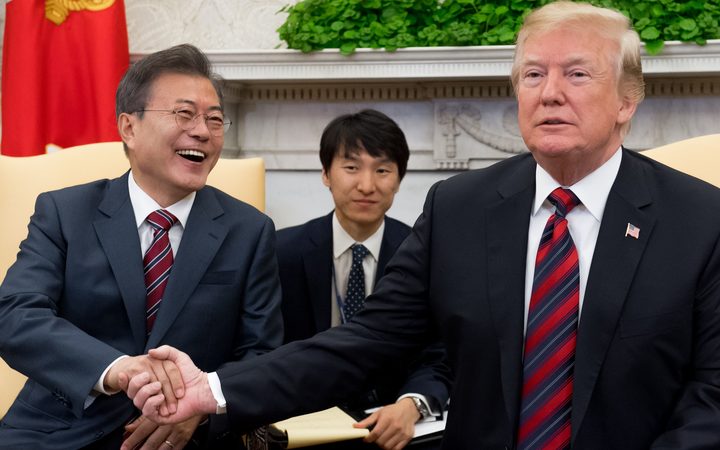 US President Donald Trump and South Korean President Moon Jae-in shake hands during a meeting in the Oval Office of the White House. Photo: AFP

He was speaking as he received South Korea's President Moon Jae-in at the White House to discuss the summit.

Mr Moon is "likely tell President Trump what to expect and what not to expect from Kim", South Korean media report.

Last week the North said it might cancel if the US insisted on it giving up nuclear weapons unilaterally.

The 12 June summit is due to take place in Singapore. It follows a summit between Mr Kim and Mr Moon in April.

"If it does not happen, maybe it will happen later," Mr Trump was quoted as saying by AFP news agency at the start of his talks with Mr Moon.

North Korea is expected to dismantle a nuclear test site this week as a good will gesture but the demolition may be delayed by bad weather.

North Korea recently cancelled high-level talks with South Korea, saying the South's joint military exercises with the US were a "provocation" and rehearsal for invasion.

Pyongyang then accused US national security adviser John Bolton of making "reckless statements" after he suggested the North could follow a "Libya model" of denuclearisation.

That was a reference to Libya's former leader, Muammar Gaddafi, who agreed to give up nuclear weapons in 2003 and was later killed by Western-backed rebels.

Mr Trump, however, later denied the US would follow the "Libyan model" if an agreement was reached with North Korea.

"The model, if you look at that model with Gaddafi, that was a total decimation," he said.

"We went in there to beat him. Now, that model would take place if we don't make a deal, most likely. But if we make a deal, I think Kim Jong-un is going to be very, very happy."

Mr Trump accepted North Korea's invitation for direct talks after more than a year of heated rhetoric between Washington and Pyongyang, amid global concern hostility might escalate into military confrontation.

The New York Times reported on Sunday that Mr Trump was asking aides and advisers whether he should proceed with the Kim summit.

North Korea conducted several nuclear tests over the past few years and developed long-distance missiles which, it says, can carry nuclear bombs as far as the US mainland.

If the summit happens, it would be historic as no sitting US president has ever met a North Korean leader.

Many observers believe the two leaders now have too much at stake for the summit not to go ahead.

However, Pyongyang's professed commitment to "denuclearisation" is likely to differ from Washington's demand for "comprehensive, verifiable and irreversible" nuclear disarmament.

North Korea has said it will start dismantling its nuclear test site this week, in a ceremony to be attended by foreign journalists.