North Korea can look forward to "a future brimming with peace and prosperity" if it agrees to quickly give up its nuclear weapons, US Secretary of State Mike Pompeo pledged ahead of a historic summit between US President Donald Trump and Kim Jong Un. 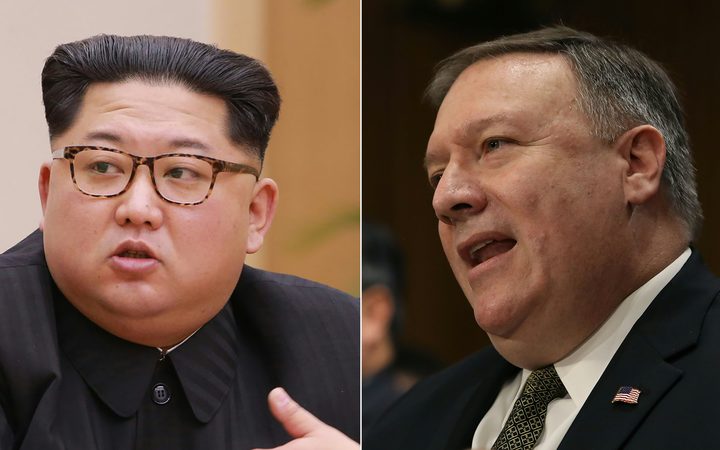 "If North Korea takes bold action to quickly denuclearise, the United States is prepared to work with North Korea to achieve prosperity on the par with our South Korean friends," Mr Pompeo told a news conference after talks with his South Korean counterpart in Washington.

"If Chairman Kim chooses the right path, there is a future brimming with peace and prosperity for the North Korean people," he said, adding that the United States had a track record of support for the Korean people that was "second to none."

Mr Pompeo, who returned from Pyongyang this week with three Americans who had been held prisoner by North Korea, said the release of men had helped set conditions for a successful meeting between Mr Trump and Mr Kim in Singapore on 12 June.

However, his comments made clear that the two sides remained far apart on the key issue of what they mean by denuclearisation.

Mr Pompeo said he had "good, substantive" conversations with Mr Kim in Pyongyang in what was his second meeting with the North Korea leader in less that six weeks, and believed both sides understood the ultimate goal of the summit.

"We had good conversations, substantive conversations. Conversations that involved deep complex problems, challenges; the strategic decision that Chairman Kim has before him about how it is he wishes to proceed and if he is prepared, in exchange for the assurances we are ready to provide to him, if he is prepared to fully denuclearise."

North Korea's development of nuclear weapons and missiles capable of reaching the United States brought exchanges of bellicose rhetoric between Mr Trump and Mr Kim last year that raised fears of a new war on the Korean peninsula.

In spite of an easing of tensions and a return to dialogue in recent months, North Korea has given no indication that it is willing to go beyond statements of broad support the for concept of denuclearisation and unilaterally abandon a nuclear weapons program its ruling family has seen as crucial to its survival.

North Korea's former spy chief Kim Yong Chul, director of the country's United Front Department, boasted in a toast to Mr Pompeo over lunch in Pyongyang on Wednesday that North Korea had "perfected" it nuclear capability.

He said its policy was now "to concentrate all efforts into economic progress," but stressed that this had nothing to do with international sanctions imposed on the country.

Mr Pompeo said US aim was clear - "to ensure that North Korean doesn't possess the capacity to threaten, not only the United States but the world, with nuclear weapons."

He described his conversations with Mr Kim as "warm" and said both had tried "our best to make sure that we were communicating clearly and had shared understanding about what our mutual objectives were."

"We had good conversations about the histories of our two nations," he added. "We talked about the fact that America has often in history had adversaries who we are now close partners with and our hope that we can achieve the same with respect to North Korea."

Mr Pompeo said the complete denuclearisation of the Korean peninsula would require a robust verification" programme by the United States and other countries.

South Korean Foreign Minister Kang Kyung-wha stressed that sanctions against Pyongyang would not be lifted until it had taken concrete steps to denuclearize.

"We very much hope to see further steps, more concrete steps toward denuclearization at the US-North Korea summit, so we're not talking about sanctions relief at this point," she said.

"What Kim Jong Un has said publicly and in discussions is that he is prepared to negotiate to achieve complete denuclearization of the Korean Peninsula," he said. "Those words are important, but we'll see what they mean."