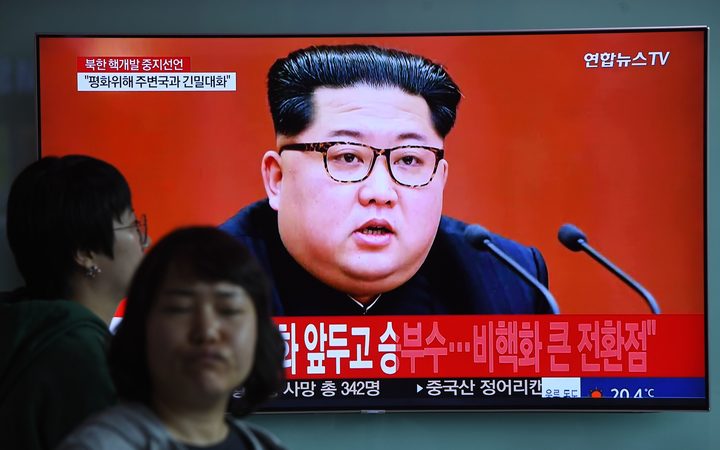 North Korean leader Kim Jong-u n warned the US over the fate of the historic summit with President Donald Trump that was scheduled for 12 June. Photo: AFP or licensors

The North's official KCNA news agency said the exercises between the US and the South were a "provocation".

It also warned the US over the fate of the historic summit between Kim Jong-un and US President Donald Trump that is scheduled for 12 June.

In March, Mr Trump stunned the world by accepting an invitation to meet Mr Kim.

"We will both try to make it a very special moment for World Peace!" the US leader tweeted at the time.

The US State Department said it was continuing to prepare for the Trump-Kim summit in Singapore and that it was not aware of any changes in the North Korean position.

"Kim Jong-un had said previously that he understands the need and the utility of the United States and the Republic of Korea continuing in its joint exercises," State Department spokeswoman Heather Nauert told a briefing shortly after the North Korean announcement.

"We will continue to go ahead and plan the meeting between President Trump and Kim Jong-un."

Some 100 warplanes, including an unspecified number of B-52 bombers and F-15K jets, began the Max Thunder drills on Friday.

The US and South Korea have always insisted such drills are purely for defence purposes, and based out of a mutual defence agreement they signed in 1953.

They also say the exercises are necessary to strengthen their readiness in case of an external attack.

The talks with South Korea that had been scheduled for Wednesday were agreed earlier this week.

They were to take place at Panmunjom, a military compound in the demilitarised zone between the two countries.

Representatives from both countries had planned to discuss follow-up measures on agreements they had made at a rare summit on 27 April.

The North's Kim Jong-un and Moon Jae-in of South Korea agreed to work to rid the peninsula of nuclear weapons following the talks.

They also agreed to push towards turning the armistice that ended the Korean War in 1953 into a peace treaty this year.

Other points the leaders agreed in a joint statement were: