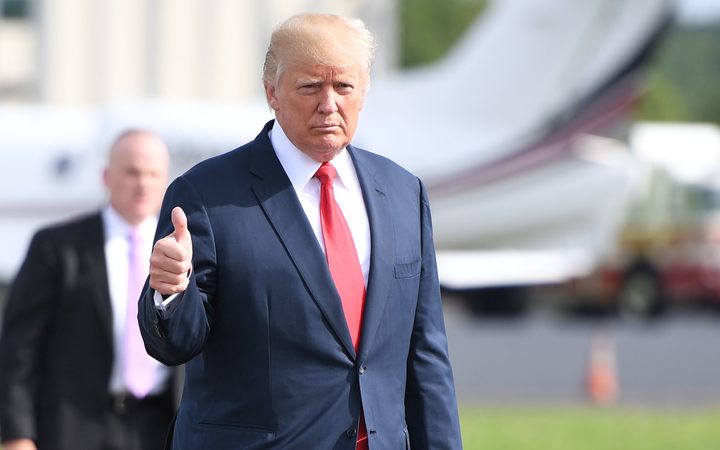 The first tweet from Jayda Fransen, the deputy leader of Britain First, claims to show a Muslim migrant attacking a man on crutches.

This was followed by two more videos of people Ms Fransen claims to be Muslim. 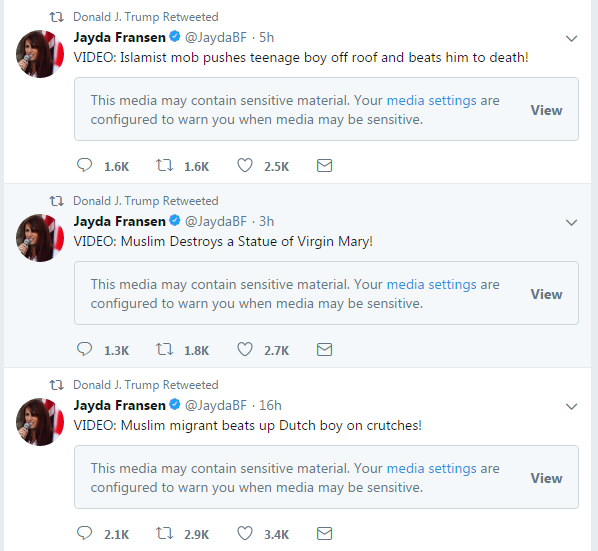 Responding to Mr Trump's posts, UK Prime Minister Theresa May's official spokesman said it was "wrong for the president to have done this".

Britain First was founded in 2011 by former members of the far-right British National Party (BNP).

The group has grabbed attention on social media with controversial posts about what they deem "the Islamification of the UK".

It has put up members to run in European elections and by-elections on anti-immigration and anti-abortion policies, but has not secured any seats.

It also contested the most recent London mayoral election, receiving 1.2 percent of the vote.

The original video was shared by US conservative commentator Ann Coulter who Mr Trump follows.

She responded enthusiastically to Mr Trump sharing her tweets. She posted on her account: "Donald Trump himself has retweeted these videos and has around 44 million followers!"

Earlier this month, Ms Fransen was charged with using "threatening, abusive or insulting words or behaviour" during speeches she made in Belfast.

She will appear at Belfast Magistrates' Court on 14 December.

Brendan Cox, whose wife, British MP Jo Cox, was murdered by a right-wing extremist who shouted "Britain First" before committing the act, has condemned the action.

Trump has legitimised the far right in his own country, now he’s trying to do it in ours. Spreading hatred has consequences & the President should be ashamed of himself.

TV presenter and journalist Piers Morgan, who has called himself a "friend" of the president, tweeted: "What the hell are you doing?"

"Please STOP this madness & undo your retweets," he said.

The Council on American-Islamic Relations, a US-based civil rights group, said: "These are actions one would expect to see on virulent anti-Muslim hate sites, not on the Twitter feed of the president of the United States."

"Trump's posts amount to incitement to violence against American Muslims," they added.

The head of the Anti-Defamation League (ADL), an anti-bigotry group, said the president's retweets would "embolden bigots in the US and abroad".

(2/2) We have seen a clear line from advocating intolerant ideas to pushing out prejudiced memes to introducing anti-immigrant & anti-Muslim policies like #TravelBan. We stand with the Muslim community and with all those condemning this shameful message.

The Muslim Council for Britain called on the UK government to "distance" itself from the comments.

"This is the clearest endorsement yet from the US president of the far-right and their vile anti-Muslim propaganda," a spokeswoman said.

I hope our Government will condemn far-right retweets by Donald Trump. They are abhorrent, dangerous and a threat to our society.