US President Donald Trump has mocked a political rival as 'Pocahontas', while welcoming Native Americans veterans to the White House. 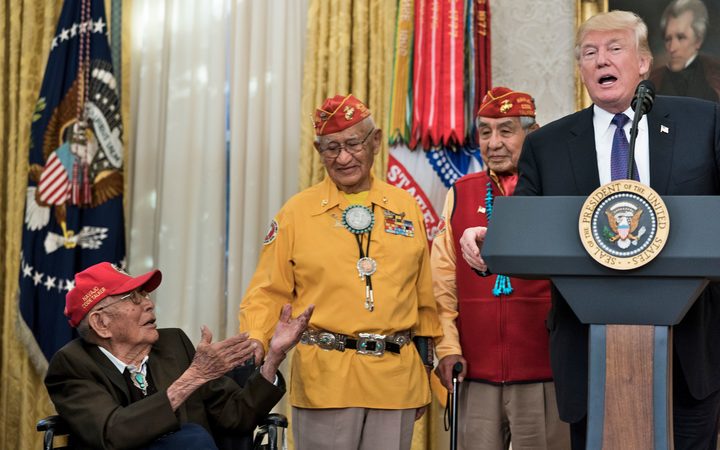 US President Donald Trump speaks in the Oval Office of the White House during an event to honor Native American code talkers who served in World War II Photo: AFP

The former Harvard professor was criticised in 2012 when it emerged she had claimed Native American ancestry without offering proof of such lineage.

Pocahontas was the daughter of a 17th Century indigenous chief.

President Trump was hosting an event on Monday for Native American code talkers who used their native language to outwit the enemy in wartime, as the Japanese had no translators that could understand their radio communications.

He said: "You're very, very special people. You were here long before any of us were here.

"Although we have a representative here in Congress who they say was here a long time ago. They call her Pocahontas.

"But you know what? I like you because you are special," he said, touching one veteran on the shoulder.

In an interview with MSNBC, Mrs Warren responded: "It is deeply unfortunate that the president of the United States cannot make it through a ceremony honouring these heroes without throwing out a racial slur."

"I think what most people find offensive is Senator Warren lying about her heritage to advance her career," she said.

Mr Trump made his remarks in the White House after first saying that he would not give a speech to honour the three veterans of World War II.

He spoke while standing before a portrait of former president Andrew Jackson, who is hated among US Native-Americans for signing into law the Indian Removal Act, which authorised the president to relocate native tribes and seize their lands.