The Bangladeshi government is set to clamp down on movements of hundreds of thousands of Rohinga Muslims fleeing Myanmar, but plans to build shelters for them. 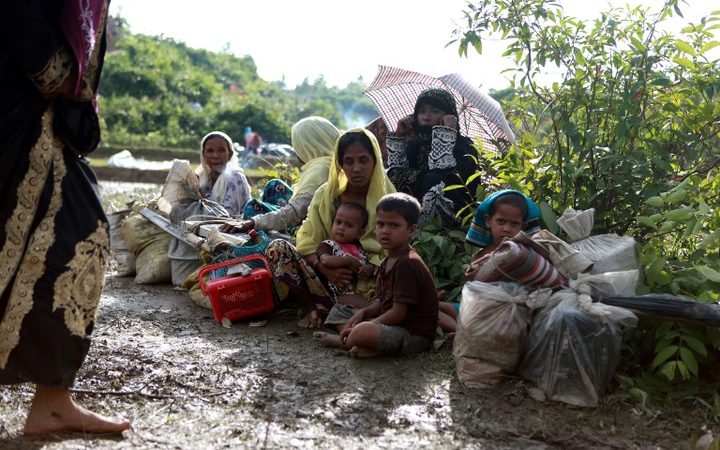 A Rohingya family sit beside a road in Nykkhongchhari, Bangladesh after fleeing violence in Myanmar. Photo: AFP

In a statement, Bangladeshi police said Rohingyas would not be allowed to travel anywhere outside of their allocated homes, not even to live with family or friends.

They must stay in fixed places allocated to them by the government and not travel elsewhere, police say.

Transport operators and drivers have also been urged not to carry refugees, with landlords told not to rent out any property to them.

Analysts say the government wants to stop the Rohingya from disappearing into the general population and to keep them visible, in the hope of returning them to Myanmar - or even a third country.

Meanwhile, Bangladesh also announced plans to build shelters for up to 400,000 people near the city of Cox's Bazar.

According to Bangladesh's Daily Star newspaper, the new shelters would be on a site covering about 8sqkm, close to established camps.

Those have been overwhelmed by arrivals from Myanmar, with more than 400,000 Rohingya Muslim refugees having entered Bangladesh in the past three weeks.

A total of 8500 temporary toilets will be built and 14 "makeshift warehouses" will be set up near the shelters, the paper says.

The new shelters are expected to be built within 10 days.

The Rohingya people are a stateless, mostly Muslim, minority in Buddhist-majority Rakhine in Myanmar, and have long experienced persecution.

They have been fleeing what the UN has now identified as a case of "ethnic cleansing".

Violence re-erupted in northern Rakhine last month, with militants attacking police posts and killing 12 security personnel. Rohingyas who have fled Myanmar since then said the military responded with a brutal campaign, burning villages and attacking civilians in a bid to drive them out.

An estimated 58,000 Rohingya have already fled and crossed into Bangladesh after violence erupted in the state of Rakhine, where there have been ongoing clashes for decades.

Existing refugee camps are full and the new arrivals are sleeping rough in whatever space they can find, reports say.