The Kofi Annan-led Advisory Commission on Myanmar's Rakhine State has urged the National League for Democracy government to grant birth certificates and citizenship to Rohingya children born there. 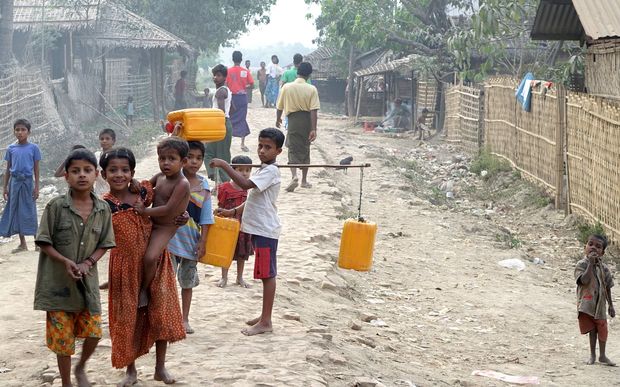 The commission was created last year by the new NLD administration led by Aung San Suu Kyi, following a violent flare-up of tensions in the territory which claimed the lives of scores of people.

The situation in the state deteriorated again this month when security forces began a new "clearance operation" around the township of Rathetaung, where Buddhist Rakhine and Rohingya communities live side-by-side.

At least 12 people including five police officers were killed when Rohingya militants launched raids on border posts in the country's Rakhine State.

More than 20 police posts came under attack by an estimated 150 militants, and seven attackers were killed in gun battles with Border Police.

It was the worst outbreak of violence for months in the coastal state plagued by religious tensions, and followed the release of the commission's report.

The northern part of Rakhine closest to Bangladesh has been in lockdown since deadly attacks by militants on border posts in October 2016. More than 87,000 Rohingya fled across the border into neighbouring Bangladesh after the army cracked down, following the deaths of nine police in the attack.

The UN believes those security "clearances" may have amounted to ethnic cleansing of the Rohingya, a mainly Muslim minority living in Buddhist Myanmar.

The report criticised Myanmar's 1982 Citizenship Law as failing to meet international standards, as it contradicts the principles of non-discrimination under international law and treaties signed by Myanmar, as well as domestic law, including the 2008 Constitution.

Rohingya had for many years not been regarded as citizens of Myanmar, and Rakhine State Muslims have been critical of the new verification process, citing it as discriminatory.

Mr Annan said reforming the citizenship law would be seen as highly sensitive in Myanmar, particularly for the ethnic Burmese in Rakhine state.

"We are well aware that our recommendations on citizenship and freedom of movement touch on profound concerns of the Rakhine population," he told a news conference in Yangon.

"If issues are left to fester, the future of Rakhine State and indeed Myanmar as a whole will be irretrievably jeopardized," said Mr Annan.

The commission's report was also critical of the time taken to modify the processes around citizenship verification, which have been widely criticised.

However, Mr Annan suggested the Muslim community collaborate further with the government to speed up the process.

The Commission said just 13,000 Muslims - of whom 9000 are ethnic Kaman - have been recognized as full citizens or naturalized citizens, out of more than one million Muslims who remain stateless in the country, a large number of them in the northern Rakhine State.

James Gomez, Amnesty International's director of southeast Asia and the Pacific, agreed with the report's findings that Myanmar's 1982 Citizenship Law be amended, and encouraged the lifting of restrictions on freedom of movement for Rohingya.

"Without concrete action by the authorities to address long-standing grievances and redress decades of violations, people in the region will continue to be trapped in a cycle of deprivation and abuse," Mr Gomez said.

Military leader General Min Aung Hlaing was among many army figures who claimed the report was "factually wrong" and questioned the "impartiality" of the commission's work.

A statement from Tatmadaw, Myanmar's armed forces, said citizenship must be granted in line with existing laws and that the national verification process existed in order to examine applicants for "associate citizenship".

The Office of the Commander-in-Chief also said more emphasis must be placed on Muslims' refusal to participate in the national verification process.

He also warned that unless the local Buddhist population accept the report's findings, it would be very difficult to address the issues raised.

Overall, the commission needed to understand the perspective of the military, the government, and local Arakanese, the General said.