US President Donald Trump has praised the relief response to Hurricane Harvey on his second visit to flood-hit states. 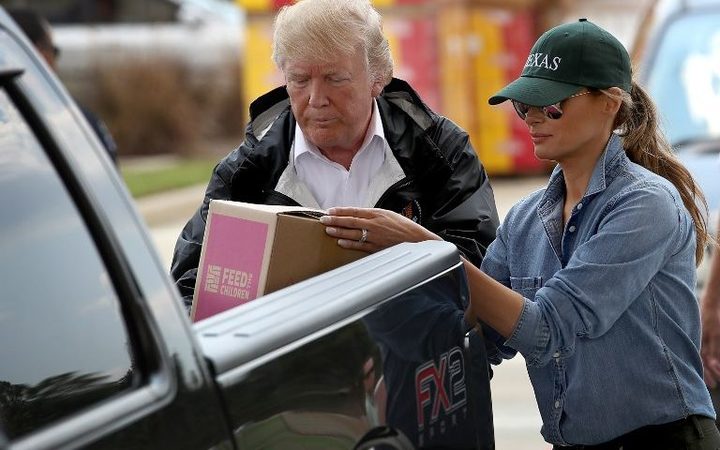 "Things are working out well," Mr Trump said of the efforts, as he and wife Melania met victims and volunteers in Texas.

"As tough as this was, it's been a wonderful thing," he added. "I think even for the country to watch and for the world to watch."

The devastating hurricane made landfall in the state a week ago.

Some residents have been allowed to return to their homes but flood waters are still rising in other areas.

Harvey has been blamed for at least 47 deaths, and about 43,000 people are currently housed in shelters.

President Trump and the first lady visited Texas earlier in the week but stayed clear of the disaster zone, saying they did not want to divert resources from rescue work.

However, the president was criticised for not meeting victims of the flooding and for focusing largely on the logistics of the government response.

Visiting Texas again on Saturday, Mr and Mrs Trump made a point of meeting flood survivors and volunteers in Houston. They took part in food distribution at a shelter, handing out packed lunches, and posed for photographs with victims when they requested it.

During a tour of a shelter, the president said: "I think people appreciate what's been done. It's been done very efficiently, very well, and that's what we want. We've very happy with the way things are going. A lot of love. There's a lot of love."

Just got back to the White House from the Great States of Texas and Louisiana, where things are going well. Such cooperation & coordination!

The president and his wife then travelled to Lake Charles, Louisiana, which also suffered flash floods, before flying back to Washington.

Amid the destruction, stories have been shared of people opening their homes and businesses to others, and forming human chains to save people from treacherous rising waters.

However, many are also now returning to destroyed homes without the insurance to fix them.

Experts estimate that only about 20 percent of those in Houston's worst hit areas have flood insurance.