EU foreign ministers have agreed to restrict exports of inflatable boats and outboard motors to Libya in a drive to curb the smuggling of refugees and migrants. 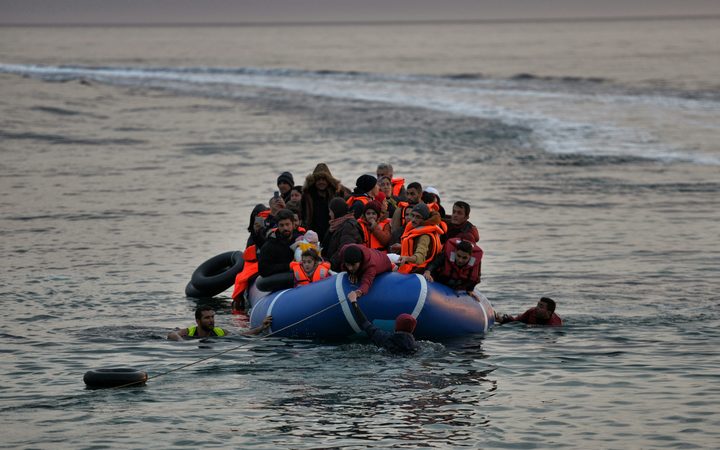 The restrictions will not apply to legitimate Libyan businesses such as fishing crews, an EU statement said.

It is not clear how the EU will check that such exports do not end up in the wrong hands in the lawless country.

Meanwhile Luxembourg has warned that EU funds may be helping to drive refugees and migrants into Libyan "concentration camps".

Many of those exploited by people-smuggling gangs in Libya have suffered brutality, including sexual abuse. The country is plagued by violence and lawlessness.

More than 88,000 refugees and migrants have crossed the Mediterranean to Italy so far this year, and more than a quarter of them arrived in June alone.

The numbers are higher than in the first half of last year.

Responding to an Italian plea for help, the EU has been helping to train Libyan coastguards.

Luxembourg's Foreign Minister Jean Asselborn said "we have financed these coastguards and it's right", but those found were being brought back to Libya "to these camps we've seen pictures of".

"Those are sometimes concentration camps, camps where people are raped, where there is no law."

Italy has EU backing for a code of conduct that would regulate non-governmental organisations involved in rescuing refugees and migrants off the Libyan coast. Critics accuse NGOs of encouraging departures from Libya.

EU foreign policy chief Federica Mogherini said 5000 migrants had returned home voluntarily from Libya this year under EU-funded schemes, more than double the number in the whole of last year.

The EU export restrictions will apply when there are "reasonable grounds" to suspect that people smugglers are the end users. Boats and motors in transit to Libya via the EU will also be restricted.

Separately on Monday, Italian Prime Minister Paolo Gentiloni said conditions were not right to push through a bill giving citizenship to the children of immigrants.

The law would have made about 800,000 people citizens and has already taken years to reach the upper house, or Senate.

Mr Gentiloni called the bill on citizenship "just", but said he had run out of time and was putting it back until autumn.

Many of the new arrivals have come through Sicily, and when a local prefect on the island sent 50 migrants to a hotel in the village of Sinagra at the weekend, dozens of local mayors began a protest outside.

They argued the facilities were insufficient and the number was far higher than the government's agreement with local authorities to aim for 2.5 migrants per 1000 of population.

"We aren't racist or against migrants, but the distribution has to to be fair," local mayor Vincenzo Lionetto Civa said.