Unicef has highlighted the plight of children caught up in the wave of migration from Libya to Italy. 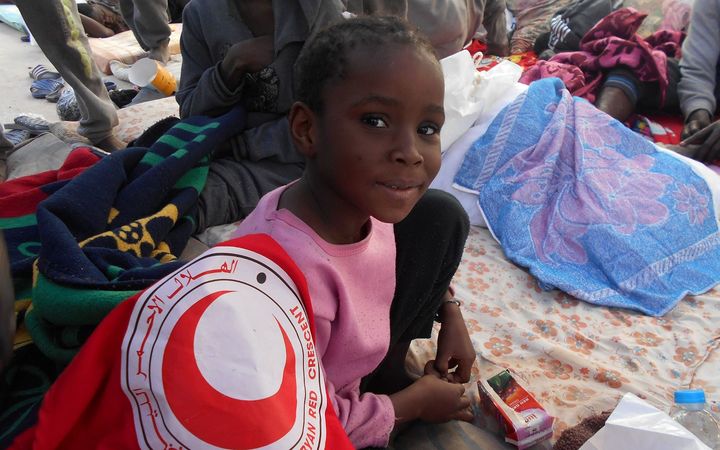 A young girl at a detention centre after 69 migrants, some of whom were dead, were found inside a shipping container near the Libyan coastal town of Khoms. Photo: AFP

A new report shows nearly 26,000 mostly-unaccompanied children made the dangerous journey across the Mediterranean, double the previous year.

In it, Unicef said many children suffer from violence and sexual abuse at the hands of smugglers and traffickers.

But they rarely report their abuse, for fear of arrest and deportation.

The agency also said there is not enough food, water and medical care in Libya's detention centres.

The report - A Deadly Journey for Children - documents stories of slavery, violence and sexual abuse experienced by huge numbers of vulnerable children.

"What really shocked Unicef staff and me ... is what happens to them [children] on this route," Justin Forsyth, the organisation's deputy executive director said.

"Many of these children have been brutalised, raped, killed on this route."

Nine-year-old Kamis from Nigeria was rescued at sea and held at a detention centre in the Libyan town of Sabratha.

"They used to beat us every day," she told the researchers.

"There was no water there either. That place was very sad. There's nothing there."

Much of the violence was gratuitous, and much of it was sexual.

"Nearly half the women and children interviewed had experienced sexual abuse during migration," the report said.

"Sexual violence was widespread and systemic at crossings and checkpoints."

Many of the assailants are in uniform. This is said to be just one reason why those who suffer abuse are reluctant to report their experiences. 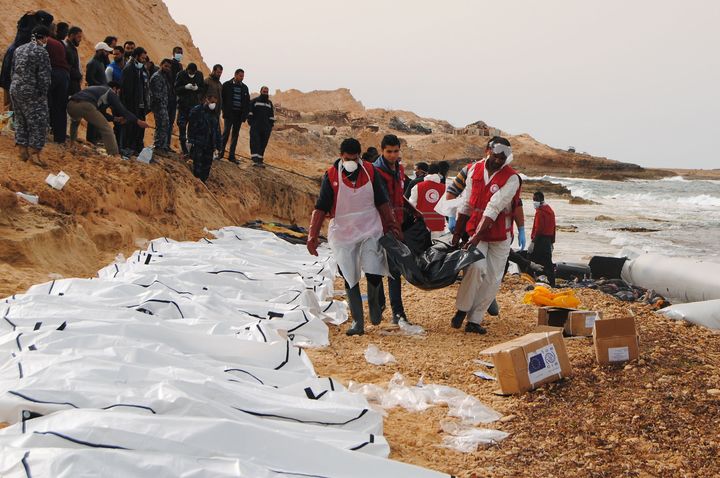 Volunteers recovering the bodies of 74 migrants that washed ashore on February 20 near Zawiyah on Libya's northern coast. Photo: AFP

And Libya, as the funnel through which so many journeys pass, has earned itself a shocking reputation as the epicentre of abuse.

"Approximately one third [of those interviewed] indicated they had been abused in Libya," the report said.

"A large majority of these children did not answer when asked who had abused them."

So commonplace were stories of rape and sexual enslavement that some women embarking on the journey took precautions such as getting contraceptive injections and carrying emergency protection with them.

The report maps 34 known detention centres in Libya, three of them deep in the country's desert interior.

Most are run by the government's Department for Combating Illegal Migration. But Unicef said armed groups also hold migrants in an unknown number of unofficial camps.

"That's where a lot of abuse is happening and we have very, very limited access."

In 2016, more than 180,000 migrants crossed from Libya to Italy. According to the UN, almost 26,000 of these were children, most of them unaccompanied. The number of unaccompanied children appears to be soaring.

"It's a combination of factors," Mr Forsyth said.

"The situation in places like Eritrea and northern Nigeria is very bad. Also in the Gambia recently."

'I wanted to cross the sea'

Politics aside, poverty and the promise of a better life remain key drivers.

"I wanted to cross the sea," 14-year-old Issaa told researchers.

"Look for work, work hard to earn a bit of money to help my five brothers at home."

But two-and-a-half years after leaving home in Niger, Issaa was found living alone in a Libyan detention centre.

"My father collected money for my journey, he wished me luck and then let me go."

The migrants are, of course, heavily dependent on smugglers to get them through the desert and across the sea.

A recent case when dozens bodies were found washed up on the shore near the western city Zawiya shows that this remains extremely hazardous.

But smuggling is all-too often associated with human trafficking. Victims accept migration packages from criminal gangs, only to find themselves forced into prostitution to repay their debts.

"Libya is a major transit hub for women being trafficked to Europe for sex," the report said.

Libya's continuing political turmoil makes it extraordinarily difficult to tackle a phenomenon, which the report said was has spiralled out of control.

But Unicef has urged Libya, its neighbours and regional organisations to do more to protect children.

A regional initiative would include improved birth registration, the prevention of trafficking, safe and legal pathways for children fleeing armed conflict and, where appropriate, family reunification.

"Whether they're migrants or refugees, let's treat them like children," Mr Forsyth said.

"It's a reflection of our humanity, our values, how we respond to this crisis."