At least 90 people are feared drowned in the Mediterranean Sea after a boat carrying refugees and migrants sank off the coast of Libya. 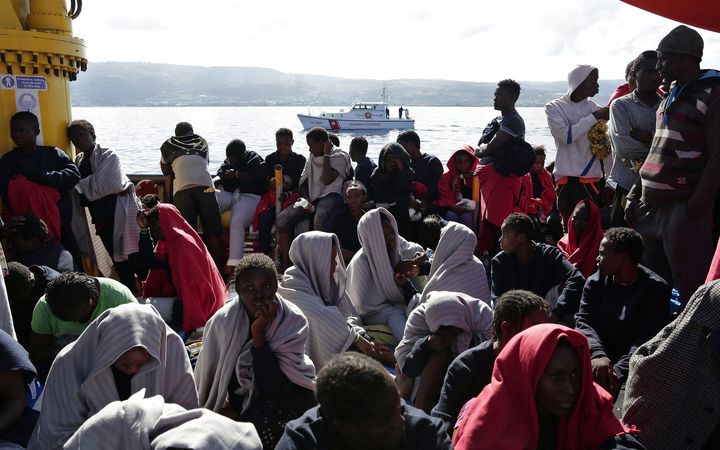 A picture released by the Italian Red Cross on October 22, 2016 shows migrants landing in Vibo Marina, after a rescue operation in the Mediterranean Sea. Photo: AFP

About 110 were on board the boat, which was headed across the Mediterranean Sea to Italy.

Eight bodies were recovered from the water on Sunday and four people were rescued, the Italian coastguard said.

But difficult conditions hampered an overnight search for survivors, and at least 90 people are still missing.

The boat sank between Libya and Italy, about 50km from the Libyan coast.

It is unclear what the nationalities of the refugees and migrants involved are.

On the weekend, the Italian coastguard was involved in a series of rescues, of about 550 migrants making the journey across the Mediterranean.

Doctors Without Borders (MSF) said that in one case it found 123 people crammed on to a single inflatable dinghy.

Ed Taylor, who is on board the MSF rescue ship Aquarius, told the BBC the situation in the Mediterranean was "horrific", and desperate people were still making the trip despite the cold and wet conditions.

"It's incredibly difficult to operate at the moment," he said.

Meanwhile, Flavio Di Giacomo, from the International Organisation for Migration (IOM), said survivors of other recent crossings claimed they had been forced out to sea, despite the poor weather.

"Those migrants that arrived lately ... they told us they didn't want to leave when they arrived at the beaches to see that the situation of the weather was so bad.

"But smugglers have forced them to leave and to get on these rubber dinghies, which are really unseaworthy vessels.

"After a few hours of navigation they start to take on water."

The number of migrants travelling to Europe by land has dropped since the height of the migrant crisis in late 2015, but sea crossings remain both popular and dangerous.

More than 1000 people have arrived in Europe by sea in the first two weeks of 2017, the UN refugee agency (UNHCR) estimates. Before the latest incident, it estimated 11 people had died or were missing.

In 2016, the UNHCR said 5000 people died trying to reach Europe by Mediterranean routes - the highest number yet. Many of those making the journey are children.

The UN children's charity, Unicef, said this week that 25,800 unaccompanied migrant children arrived in Italy by sea in 2016, double the number of the previous year.

It said most of those children arrived in Italy after making the sea crossing from Libya - and the majority had come from Eritrea, Egypt, the Gambia and Nigeria.

On Sunday, which is the world day of migrants and refugees in the Catholic Church, Pope Francis called for "every possible measure" to protect young migrants, saying they face many dangers and should be offered protection "as well as integration".