Macedonia has said it will no longer let any migrants and refugees through its border with Greece, effectively blocking the Balkan route to northern Europe. 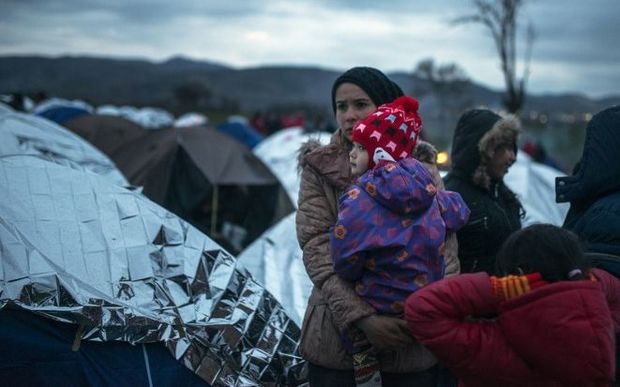 A woman waits with her child for permission to cross the border from Macedonia into Serbia. Photo: AFP

Hundreds of thousands of migrants have travelled through Macedonia over the past year, heading north.

Macedonia had begun to limit the numbers, first to Syrian, Afghan and Iraqi migrants, then recently to just a trickle of mainly Syrians.

The decision to close the border totally comes after Slovenia yesterday barred access to migrants transiting the country.

Slovenian Prime Minister Miro Cerar said his country would allow in only migrants who planned to seek asylum there, or those with clear humanitarian needs.

Croatia and Serbia then said they would follow suit.

The latest measures leave about 14,000 people stranded on the Greek side, unable to continue their journey.

There are also 408 migrants stranded in Croatia, 1000 on the Macedonian side of the Serbian border, and 400 in "no man's land" between Serbia and Macedonia.

One in, one out

The latest moves to stem the flow of migrants come after the European Union and Turkey agreed on a plan to ease Europe's biggest refugee crisis since World War II.

Under the plan, still to be finalised, all migrants arriving in Greece from Turkey would be sent back. For each Syrian returned, a Syrian in Turkey would be resettled in the EU.

Announcing the plan on Monday, European Council President Donald Tusk said there would no longer be a path to Europe for migrants. "The days of irregular migration to Europe are over," he said.

In another development, leading international non-governmental organisations accused the French government of planning to close a purpose-built camp for refugees and migrants outside the French town of Dunkirk.

The newly-opened site has been described as the first in France to meet international standards.

It provides shelter, food, sanitation and medical care for almost 1200 people, but officials have said they are concerned about security and potential fire hazards.