Wildlife activists have accused Indian authorities of a culture of secrecy around steadily rising tiger deaths. 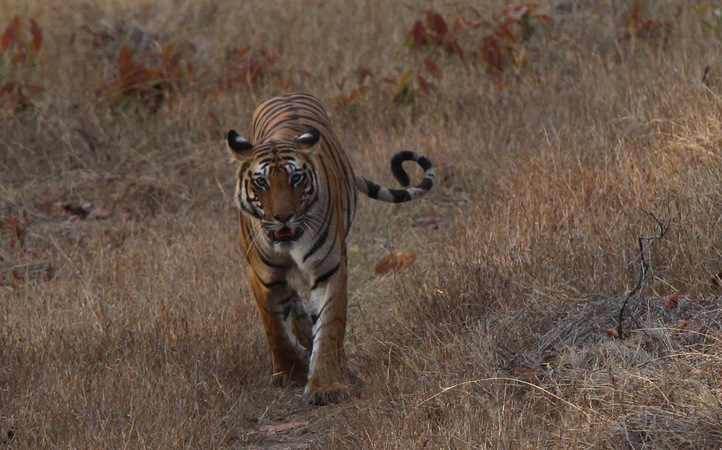 At least 67 tigers have died this year - many as a result of conflict with humans, including poachers, they say.

"There is no transparency in these matters," Theodore Baskaran, a former trustee of WWF-India, told the BBC.

India is home to 60 percent of the world's tigers but they face increasing habitat loss and demand for their body parts in China and other parts of Asia.

Senior officials of the National Tiger Conservation Authority (NTCA) confirmed to the BBC that the bodies of 58 tigers had been recovered between January and June this year, as well as body parts from nine other tiger fatalities.

Karnataka state in the south recorded 14 deaths, more than any other, while the central state of Madhya Pradesh accounted for 13.

"Wildlife activists are alarmed mainly because of the secrecy surrounding the deaths. Also there is no co-ordination between researchers and the forest department," Theodore Baskaran said.

But NTCA authorities say each case is dealt with according to standard operating procedures. They said they were unable to divulge the causes for this year's tiger deaths until final reports from field officers had been received.

On current trends this year's mortality rate could surpass last year, when 120 deaths were recorded, the highest number since 2006. Tiger deaths have steadily gone up in India in recent years. In 2015 officials reported 80 tiger deaths, and 78 in the previous year.

It is thought India had about 100,000 tigers a century ago. Numbers had plummeted to fewer than 1500 by the early years of this millennium.

Tigers are now on the International Union for Conservation of Nature (IUCN) red list of endangered animals.

They are found in just 2 percent of India and encroachment by humans on their habitat - as well as poaching for body parts and trophy hunting - is a key factor in their decline.

Since 2006 conservation efforts have yielded significant results, however. India's tiger population rose from 1706 to 2226 during the period 2011-2016.

But conservationists say much more needs to be done.

Theodore Baskaran and other activists want forest officials to cultivate the goodwill of forest dwellers around sanctuaries.

"The digital camera revolution coupled with uncontrolled tourism inside tiger territory is a worrying trend," he said.

"As thousands of camera-toting tourists go closer and closer into their habitat, the big cats get used to human proximity. This helps poachers get close to the animals and kill them."

"The higher number of deaths in the current year so far is also due to natural mortality. Deaths due to poaching and accidents are preventable and those are the ones that worry us," Belinda Wright, executive director of the Wildlife Protection Society of India (WPSI), told the BBC.

According to WPSI records, so far this year 17 tigers died due to infighting and 18 were reported to have been found dead, with cause of death unknown.

The group says 19 tigers died at the hands of poachers. She and other conservation activists are concerned about the growing number of tigers killed by electrocution and other methods in the human-tiger conflict.

"Tiger numbers have increased, and this in turn will be reflected in the number of natural deaths. While conservation efforts have had an effect there are still improvements needed, which include improved intelligence and enforcement of laws," she said.

Human-tiger conflict poses a huge challenge to conservation efforts. For a tiger to survive it needs about 25,000 acres of forest land.

Shrinking forest leads to scarcity of prey and the tigers are forced to invade villages and hunt cattle on which many local communities depend for their livelihood.

In retaliation tigers are poisoned, killed or captured.