Four of the country's most endangered bird species, the kākāpō, have been moved to Little Barrier Island as part of a trial to improve the parrots' population. 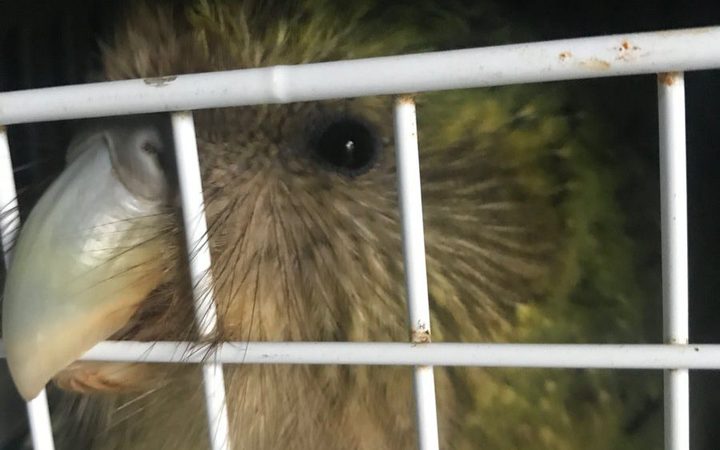 One of the kākāpō, Tiaka, in her crate as she waits to be relocated. Photo: Andrew Digby

The flightless parrots faced the same trials and tribulations as most airline passengers as they were transferred from Invercargill to Auckland on an Air New Zealand flight.

Twenty years ago there were 50 kākāpō left in New Zealand. Now there are 153, and 68 of them are on Whenua Hou / Codfish Island, near Stewart Island.

Yesterday, a male and female bird - both over 40 years old - and two females aged six and eight were transferred from Whenua Hou to Hauturu-o-Toi / Little Barrier Island.

The Department of Conservation wants to find out whether the parrots can breed on Hauturu without supplementary feeding.

The four kākāpō were caught before sunrise yesterday by Department of Conservation staff, carried back to base in fabric bags, put into crates and flown by helicopter to Invercagill.

They were transferred to an Air New Zealand flight, where they were strapped into seats next to other passengers.

Four #kakapo leaving Whenua Hou by heli for the first leg of their journey to Hauturu. #conservation #endangeredspecies #parrots pic.twitter.com/1AOnAL7ASw

The department's kākāpō technical advice officer, Daryl Eason, said the birds always attracted a lot of attention and it was fun taking them on the flight up because it gave people a chance to see the rare creatures.

Twelve hours, several flights, and a few security checks later they made it to Hauturu, where they will bring the island's kākāpō population to 14.

#kakapo have to go through airport security too! They attract some attention on the flight. @FlyAirNZ pic.twitter.com/wWLjWIL2T6

Mr Eason said kākāpō needed big areas of habitat to support a reasonable size population, and appropriate tree species to breed on. On the Southern Islands they breed when rimu trees fruit, every second or third year.

"Because they're vegetarians they need a really good nutritious food source to be able to raise their chicks because they don't eat insects like most other birds do."

DOC kākāpō recovery programme manager Deidre Vercoe told Morning Report previous populations of the birds lived on Hauturu from 1982 and 1999. They were removed just before a kiore eradication programme.

Ten birds were put back in 2012 but in the past five years only two chicks hatched, and neither survived.

Ms Vercoe said more predator-free space in New Zealand was needed for the birds, and the island held great promise.

"We know they can live there really well, we know they can breed there, but what we don't know is whether they can raise their own chicks there without any supplementary food or support."

Hauturu did not have rimu trees, and the birds may breed in response the fruiting of beech, kauri or other trees.

Two of the parrots transferred yesterday had previously lived on the island, so should settle in quickly, Ms Vercoe said.