A female zookeeper has died in a "freak accident" after a tiger entered an enclosure at a wildlife park in the UK. 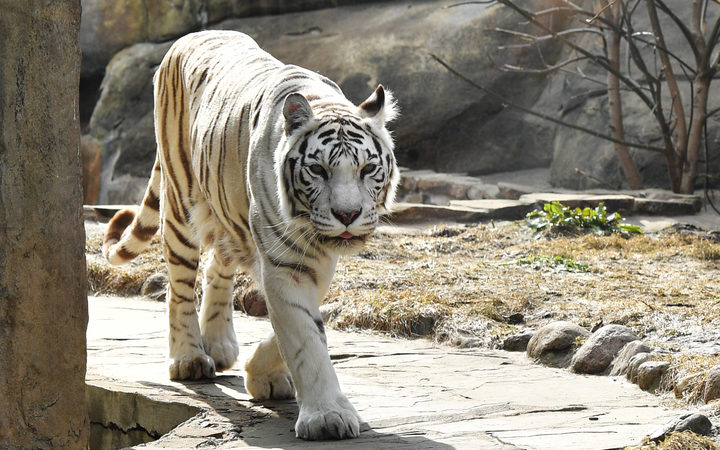 A tiger, not pictured, killed a woman at the UK's Hamerton Zoo Park when it entered an enclosure she was in. Photo: AFP

The death happened at Hamerton Zoo Park, near Huntingdon, Cambridgeshire, about 11.15am (UK time) on Monday.

Cambridgeshire Police said: "A tiger had entered an enclosure with a keeper. Sadly the female zookeeper died at the scene."

Visitors were led away from the zoo. At no time did the animal escape from the enclosure, police said.

Officers investigating the death said it was "not believed to be suspicious".

Hamerton Zoo Park said in a statement: "This appears to have been a freak accident.

"At no point during the incident did any animals escape their enclosures and at no point was public safety affected in any way.

"All our thoughts and sympathies are with our colleagues, friends and families at this dreadful time."

The park would be closed from Tuesday and an investigation was under way, the zoo said.

"We were close to the tiger enclosure when a member of staff shouted for everyone to leave the park quickly and immediately."

Another visitor said: "I was taking pictures of the leopards. The parrots were flying and squeaking and going berserk.

"Then staff were running towards the tigers and lions area. We were all told to leave the park. But after 20 minutes everyone was allowed back in.

"Staff asked us to leave again. They're not saying what happened. However, they were great. They were calm, just doing their job."

Visitor Jeff Knott, 32, from Cambridgeshire, said staff had been "a real credit" to the zoo during the evacuation.

"Staff were very calm and professional," he said.

"All visitors around us were leaving in a very calm manner - no running, shouting or anything similar."

New Zealand zookeeper Samantha Kudeweh, 43, was killed by a tiger at a zoo in Hamilton in September 2015, after entering the animal's enclosure not knowing he was roaming free.

The zoo pleaded guilty to failing to take all practical steps to ensure her safety.