A powerful vehicle bomb has hit the diplomatic area of the Afghan capital, Kabul, killing at least 80 people and injuring 350. 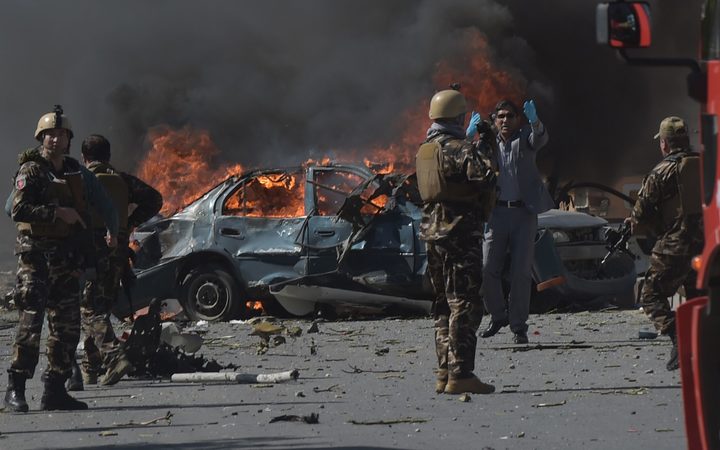 Afghan security forces personnel at the site of the blast in Kabul. Photo: AFP

It struck close to the German embassy in Zanbaq Square, with civilians said to be the main casualties.

The morning rush-hour blast was so strong it blew out windows and doors hundreds of metres away.

No group has yet said it carried out the bombing. The Taliban and IS have both been behind recent attacks, although the former has released a statement denying responsibility.

The bomb went off about 8.25am local time (3.55pm NZT) during rush hour in the diplomatic quarter.

Makeshift ambulances carried wounded away from the scene, as frantic relatives gathered both at the cordoned-off perimeter of the blast site and later at hospitals to try to locate loved ones.

Images showed dozens of blackened and burned out cars. More than 50 vehicles were destroyed.

Basir Mujahid, a spokesman for Kabul Police, told Reuters the explosion had taken place close to the German embassy but added it was "hard to say what the exact target is".

Some reports say the bomb was in a lorry or water tanker.

The BBC's Harun Najafizada in Kabul says questions are already being asked about how the vehicle could have penetrated such a heavily fortified area, with its 3m high blast walls, to carry out the deadliest attack in the capital in years.

Initial reports suggest civilians bore the brunt of the casualties.

The health ministry said the casualty figures were expected to rise further. Spokesman Ismael Kawoosi said: "They are still bringing bodies and wounded people to hospitals."

The interior ministry has called on residents to donate blood, saying there was a "dire need".

One local shop owner, Sayed Rahman, told Reuters his store was badly damaged, adding: "I have never seen such a terrible explosion in my life."

Another resident, Abdul Wahid, told the BBC the blast "was like a heavy earthquake".

Several international and local sources have been reporting on casualties:

The Ministry of Foreign Affairs and Trade said New Zealand's embassy in Tehran was in contact with authorities in Kabul.

There were currently 10 New Zealanders registered as being in Afghanistan.

The ministry said at this stage there was nothing to suggest any New Zealanders have been caught up in the incident.

The Afghan Taliban has denied responsibility for the devastating attack, Reuters reported.

Last month, the Taliban announced the start of a major spring offensive, saying their main focus would be foreign forces, targeting them with a mix of conventional, guerrilla, insider and suicide attacks.

But a spokesperson said in a statement that the movement's fighters had no involvement and it condemned any such untargeted attacks that caused civilian casualties.

The US has about 8400 troops in Afghanistan, with another 5000 from NATO allies.

The Pentagon has reportedly pressed President Donald Trump to send thousands more troops back to the country to try to counter gains by the Taliban. More than a third of the country is now said to be outside Afghan government control.

A Taliban attack on an Afghan army training compound in the northern city of Mazar-e Sharif last month killed at least 135 soldiers, and led to the resignation of the defence minister and army chief of staff.

The so-called Islamic State in Afghanistan has also been active, saying it was behind a suicide bomb attack this month on a Nato convoy that was passing the US embassy in Kabul. At least eight civilians were killed.