A suicide attack on a convoy belonging to the NATO mission in Afghanistan has killed at least eight people in Kabul, officials say. 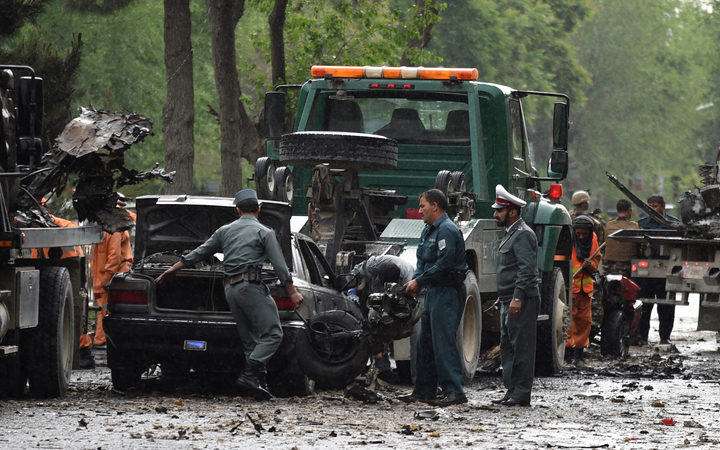 Afghan security personnel investigate the site of the suicide attack near the US embassy in Kabul on Wednesday. Photo: AFP

The victims were all civilians, a government spokesman said. About 25 other people were injured, including three US service members.

The attack on the group of military vehicles happened next to the US embassy during the morning rush hour.

So-called Islamic State (IS) said it was behind the attack.

The group has been in Afghanistan since 2015 and has claimed several attacks in the country recently.

Two of the vehicles was badly damaged, along with several other passing cars, AFP reports. Windows were shattered up to several hundred metres away from the scene.

The armoured personnel carriers, which are designed to resist large blasts, were able to return to a coalition base, the NATO-led Resolute Support mission said on Twitter.

The wounded were in a stable condition with non-life-threatening injuries, and were being treated at coalition medical facilities, it added.

The attack comes three weeks after the US dropped its largest non-nuclear bomb, known as "the mother of all bombs", on a tunnel complex used by IS in Afghanistan, reportedly killing many militants.

Meanwhile, the US is discussing whether to send more troops to Afghanistan, where militant groups have carried out numerous attacks recently.