At least 43 people have been killed in a car bomb blast in the rebel-held Syrian town of Azaz, near the Turkish border, reports say. 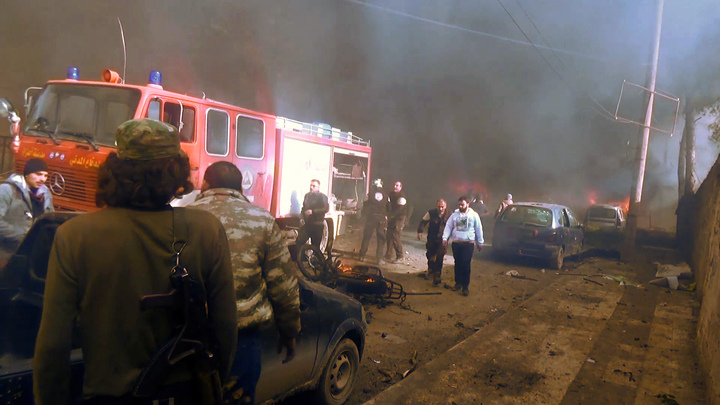 Most of the victims of the Azaz attack were report to be civilians. Photo: AFP

The explosion occurred outside a courthouse in the town, some just 7km from the Turkish frontier.

Azaz has recently been targeted by so-called Islamic State (IS).

The latest blast is the worst since a nationwide ceasefire - brokered by Russia and Turkey. IS is not included in the truce, which has mainly held.

No group has yet said it carried out the bombing, which according to some reports may have killed as many as 60 people and injured many more.

The activist group Syrian Observatory for Human Rights said six rebels were among the dead, with the rest believed to be civilians.

Why Aziz is so important for Turkey

IS has tried several times to take the town it originally held it in 2013.

It is a major stronghold of the Turkish-backed Free Syrian Army.

It has been contested by competing factions, with the Turkish government seeking to ensure that neither IS nor the Kurdish rebels it opposes manage to take control of it.

Thousands of people displaced from elsewhere in the province have settled in Azaz.

They include those from Aleppo, which the government took from the rebels opposed to President Bashar al-Assad late last year.

Twenty-five people were killed in a car bomb attack on rebel headquarters in November. And 17 others died in a similar attack on a rebel checkpoint in October.

IS has been blamed for the attacks.

Russia, along with Turkey and Iran, is now pushing for peace talks to be held later this month in the capital of Kazakhstan, Astana.