The UN Security Council has unanimously endorsed a ceasefire deal in Syria led by Turkey and Russia, as well as plans for fresh peace talks next month. 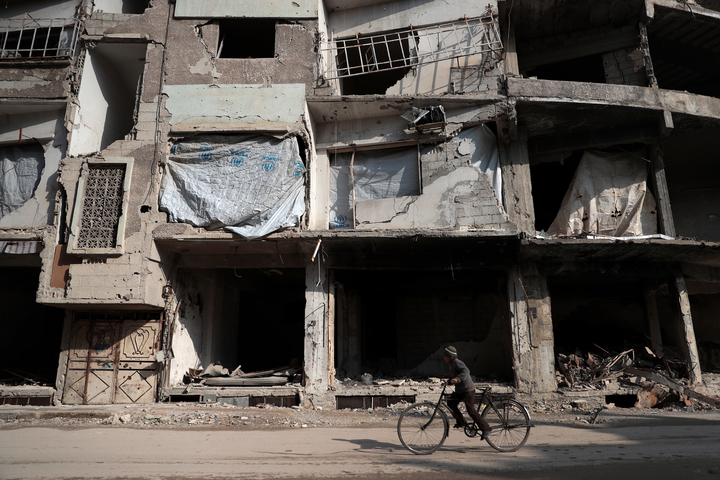 A Syrian boy cycles past damaged buildings in the rebel-held town of Douma, on 30 December 2016, on the first day of a nationwide truce. Photo: AFP

The resolution, drafted by Russia, also calls for rapid access for humanitarian aid to be delivered across the country.

The ceasefire, which began just over a day ago, has mostly held.

But Syria's main rebel alliance had threatened to abandon the truce by 18:00 GMT if the government continued to attack areas under its control.

The Free Syrian Army (FSA) issued the ultimatum to Russia - Syria's key ally - amid reports of intense bombardment by government forces on the rebel-held Wadi Barada area of Damascus, which the rebels say is in breach of the truce.

But shelling on the area concerned ceased just minutes before the deadline, the group's legal adviser, Ousama Abou Zeid, said.

It applies across Syria but does not cover certain rebel groups including the jihadists of so-called Islamic State (IS) and Jabhat Fateh al-Sham (JFS), and the Kurdish YPG militia.

Earlier on Saturday, the FSA said that, following statements from Russian officials, it was "surprised" to find that its version of the agreement differed from that of the government.

The UN resolution comes against a backdrop of deadlock among the veto-wielding members of the Security Council, with Russia supporting Syrian President Bashar al-Assad and the US, UK and France insisting he must step down as part of any deal to end the war.

Russia and Turkey also back opposite sides in the conflict, with Turkey supporting the rebellion against Mr Assad.

Why is Wadi Barada so important?

On Thursday, the UN expressed concern about the fighting in the town, saying fighters were deliberately targeting and damaging springs used to supply some 4 million people in the Damascus area with drinking water.

Wadi Barada is held by opposition forces, including JFS, which was known as al-Nusra Front until it formally broke ties with al-Qaeda in July.

On Saturday, the FSA accused the government and Iranian militias of "brazen violations" in the town, accusing them of planning a "massacre" which would "lead to an immediate end" of the truce.

"We call on Russia which signed the agreement as a guarantor for the regime and its allies to bear its responsibility," the rebels said.

The FSA added that it was "fully committed to the ceasefire in accordance with a comprehensive truce which does not exclude any area or faction present in opposition areas".

Who is included in the truce agreement?

On the one side, Syrian government forces, allied militias and the Russian military.

On the other, the FSA plus several other groups.

Ahrar al-Sham, which said it had "reservations" about the deal, and Jaysh al-Islam are Islamist groups that Russia has previously described as terrorist organisations.

Who is not included?

IS and JFS and the groups affiliated to them", are not part of the agreement, according to the Syrian army.

JFS said on Friday it would continue to fight President Assad, with a spokesman saying the political solution under the truce would "reproduce the criminal regime".

Members of the group are currently operating as part of a rebel alliance that controls Idlib province.

The FSA also said the deal did not include the Kurdish Popular Protection Units (YPG).

The militia, which has captured large swathes of north-eastern Syria from IS with US support, is designated a terrorist organisation by Turkey.

The truce is nominally nationwide, although that really only covers the areas where the sides who have signed up have a presence - western Syria.