Donald Trump's choice of right-wing firebrand Stephen Bannon as a key aide has been slammed by Democrats, civil rights groups and some Republicans, who say it would elevate the white nationalist movement into the top levels of the White House. 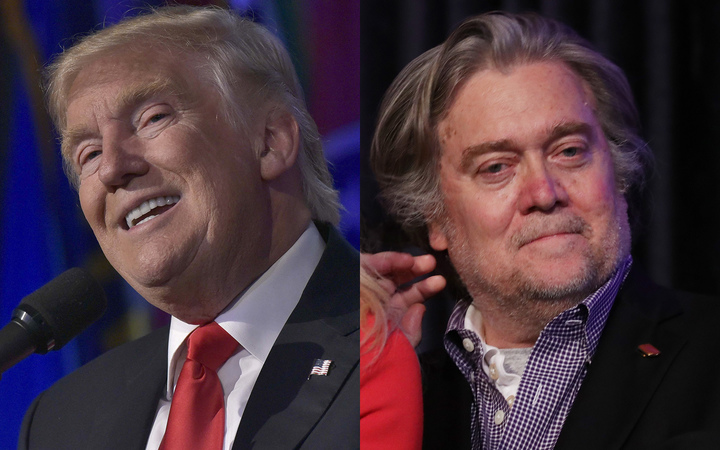 He also Washington insider Reince Priebus as his chief of staff, saying Mr Priebus and Mr Bannon would share the task of steering his administration as "equal partners."

The choice of Mr Priebus was seen as a conciliatory signal of Mr Trump's willingness to work with Congress after he takes office in January.

But critics blasted the selection of Mr Bannon, who spearheaded a shift of the Breitbart News website into a forum for the "alt-right," a loose online group of neo-Nazis, white supremacists and anti-Semites.

"There should be no sugarcoating the truth here: Donald Trump just invited a white nationalist into the highest reaches of the government," said Democratic Senator Jeff Merkley, who called on Trump to rescind the choice.

"Bannon has boasted that he made Breitbart News 'the platform for the alt-right,' which is the politically correct term for the resurrection of white nationalism," he said.

Democrats and advocacy groups on the left called Mr Bannon a promoter of racism and misogyny who is backed by the white supremacist group the Ku Klux Klan.

"It is a sad day when a man who presided over the premier website of the 'alt-right'- a loose-knit group of white nationalists and unabashed anti-Semites and racists - is slated to be a senior staff member in the 'people's house'," said Jonathan Greenblatt, head of the Anti-Defamation League.

Even some conservatives and Republicans voiced dismay. Evan McMullin, who ran as a conservative independent presidential candidate, wondered on Twitter if any national Republican leaders would condemn the pick of "anti-Semite" Mr Bannon.

John Weaver, a top strategist for Republican Ohio Governor John Kasich, tweeted that the "racist, fascist extreme right is represented footsteps from the Oval Office. Be very vigilant America". Mr Kasich was one of 16 Republican presidential hopefuls Mr Trump defeated in the party primaries ahead of last Tuesday's election.

Mr Priebus defended Mr Bannon on Monday, calling him a wise and well-educated former naval officer and saying he had not encountered the sort of extremist or racist views that critics are assailing.

"He was a force for good on the campaign," Mr Priebus said on Fox News, adding they were in agreement on "almost everything" in terms of advising the president-elect.

Hardline Trump backers counting on the wealthy real estate developer to keep his campaign promise to "drain the swamp" of business-as-usual Washington insiders may be disappointed he has named Mr Priebus as chief of staff, a position that serves as gatekeeper and agenda-setter for the president.

Throughout his career Mr Trump has said he often pits competing staff factions against each other to get a wide range of views. The early stages of his unorthodox presidential campaign were marked by frequent clashes between Paul Manafort, an experienced political insider, and brash manager Corey Lewandowski. Both eventually resigned.

Mr Trump said in his statement Mr Priebus and Mr Bannon were "highly qualified leaders" who had helped him win the White House race.

Democratic President Barack Obama, who has pledged a smooth transition of leadership despite sharp political differences with Trump, is likely to be asked by reporters about the appointments when he holds a news conference later today.

Since the election, Mr Trump has softened one of his major campaign promises of building a wall along the US border with Mexico to keep out illegal immigrants. In an interview with the CBS programme 60 Minutes on Sunday, Mr Trump said he would accept some fencing instead of a brick-and-mortar wall.

In the interview, Mr Trump also sought to play down the divisive nature of his candidacy and said Americans alarmed by his election had nothing to fear.

The president-elect and his transition team are working on picking members of his Cabinet and the heads of federal agencies.

Mr Bannon could hardly be more different. The former Goldman Sachs banker over the past year led Breitbart News in a charge against the Republican Party establishment, including Priebus' friend Paul Ryan, the speaker of the US House of Representatives.

The Breitbart attacks on Mr Ryan continued on Sunday, with an article denouncing Mr Ryan's comment on CNN that "we are not planning on erecting a deportation force."

"Speaker Ryan is now telling voters that he will not enact a central part of Trump's mandate," a Breitbart article said.

Mr Ryan, who had a tense relationship with Mr Trump during the election campaign, on Monday praised Mr Trump's choice of Mr Priebus for his White House chief of staff as the best choice for getting things done in Congress, and called it a "very, very, very good sign of things to come."

In the 60 Minutes interview, Mr Trump said he would move to deport up to 3 million immigrants who were in the country illegally and have criminal records.

Demonstrators in major U.S. cities took to the streets for a fifth straight day on Sunday to protest against Mr Trump.