Anti-Trump protesters have taken to the streets across the US for a third night since Donald Trump won the presidential election. 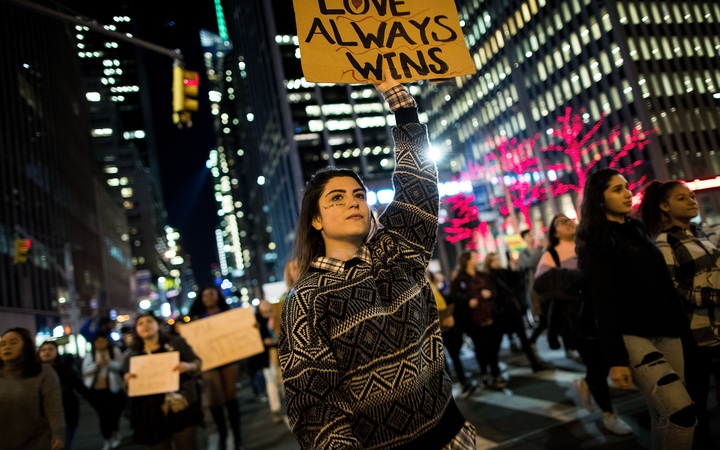 Hours after the President-elect praised their "passion", thousands took to the streets of Miami, Atlanta, Philadelphia, New York, San Francisco and Portland, Oregon on Friday night.

They voiced their anger at Trump's inflammatory and often deeply controversial campaign rhetoric about immigrants, Muslims and women.

In Miami, several thousand activists marched, with a few hundred making their way onto a highway, halting traffic in both directions.

In New York, demonstrators again gathered in Washington Square Park and by Trump Tower, where the Republican president-elect lives, on Fifth Avenue.

Trump, who initially denounced Americans who protested against his election, saying they had been "incited" by the media, reversed course and praised them on Friday.

"Love the fact that the small groups of protesters last night have passion for our great country. We will all come together and be proud!" Trump said on Twitter.

There were no reports of violence or arrests at Friday's rallies, unlike on Thursday night.

About 50 anti-Trump protesters rallied in Auckland's Aotea Square this afternoon, many carrying banners that read, "Love trumps hate" and "Stand with migrants".

Some Donald Trump supporters went to the protest, sparking several altercations between the two sides.

The protesters then marched down Queen St to the US Consulate with about half a dozen police officers watching.

There's gonna be a rumble in Aotea Square pic.twitter.com/Jqh7F7vOte

Police said one person was arrested for breaching the peace, but there were no major issues.

Mr Trump's tweets about protesters were further evidence of his mixed messages since he announced his candidacy 17 months ago.

He promised to be a president for all Americans.

On Thursday night, demonstrators in Portland threw objects, damaging new cars at a dealership. Police there arrested at least 26 people.

In Los Angeles on Thursday night, police arrested about 185 people, mostly for blocking roadways or being juveniles out past curfew, according to police. One officer was hospitalised for injuries suffered during the protest.