Protests have spread across numerous US cities with thousands voicing their opposition to Donald Trump's shock US election victory. 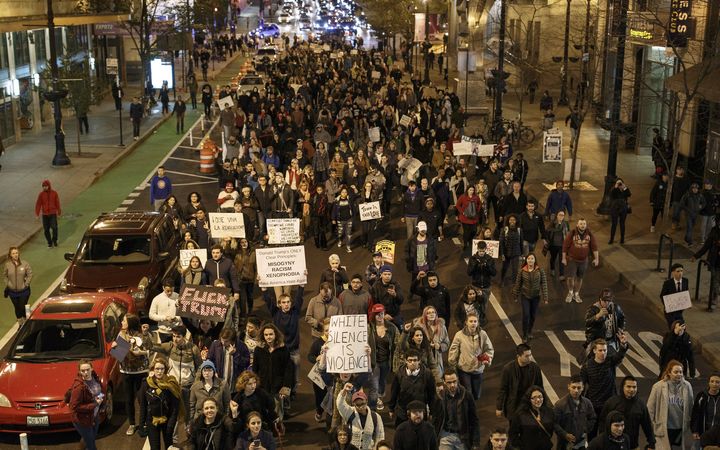 In New York, protesters gathered in Manhattan and, further downtown, hundreds walked up the streets screaming, "Not my president."

About 1000 people gathered outside the Trump International Hotel and Tower in Chicago, chanting phrases like, "No Trump! No KKK! No racist USA." 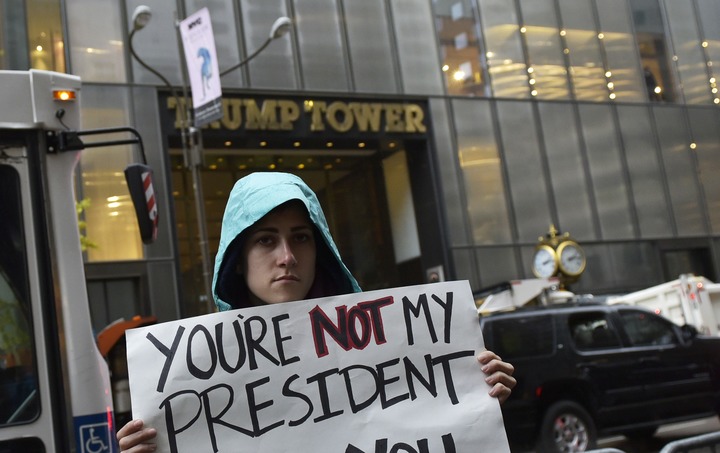 A protester across the street from Trump Tower, on 5th Avenue, New York. Photo: AFP

"I'm just really terrified about what is happening in this country," said 22-year-old Adriana Rizzo, who was holding a sign that read: "Enjoy your rights while you can."

Outside the White House, in Washington DC, others sang and prayed at an anti-Trump vigil.

In Seattle, there were reports of a shooting with multiple victims near the scene of anti-Trump protests, but police said it was unrelated to the demonstrations, Reuters reported.

#NotMyPresident march moves from the sidewalks into the streets as thousands chant and march from Union Square up to Trump Tower in NYC pic.twitter.com/KfDTrbvE6K

In California, demonstrators smashed shop windows and set rubbish and tyres alight in Oakland, across the bay from San Francisco. A few miles away, up to 1500 students at the University of California at Berkeley protested on campus.

People also gathered in Philadelphia, Boston and Portland, Oregon, where protesters blocked downtown traffic while chanting "not my president". The hashtag #NotMyPresident has been shared on Twitter thousands of times.

In Austin, the Texas capital, about 400 people marched through the streets, police said. 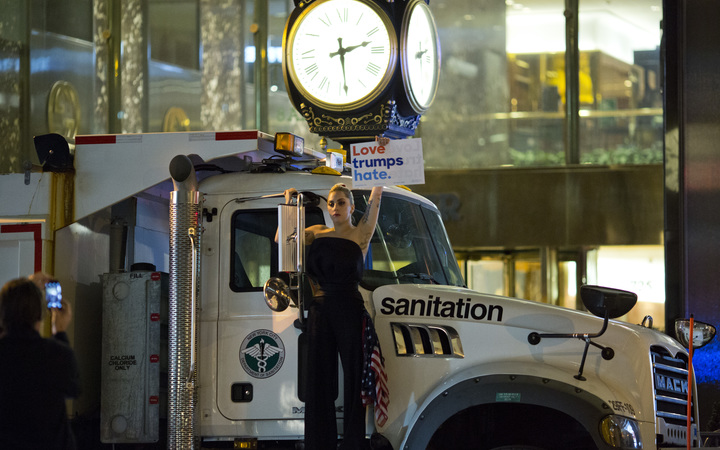 Students walk out of schools

Hundreds of students in Pittsburgh, Pennsylvania, and Seattle, Washington, as well as in smaller towns around America, walked out of class in an effort to "stop President Trump".

Some 1500 high school students and teachers in Berkeley, California, walked out of classes chanting "not our president".

The students rallied in the courtyard of Berkeley High School, according to a school district spokesman, and marched toward the campus of the University of California at Berkeley, a city known for its progressive politics. Some teachers demonstrated with students.

WE WILL NEVER BE SILENCED. #LOVETRUMPSHATE

"We're sitting here, setting our clocks back to 1950 electing this fool. You know? Trump honestly just makes us realise how much hate and ignorance is left," one female student told the rally, according to a live stream of the demonstration on the Periscope.

She said people of colour were afraid about the potential for discrimination, and immigrant families were now worried about the threat of deportation threatened by Trump.

A predominantly Latino group of about 300 high school students walked out of classes in Los Angeles and marched to the steps of City Hall, where they held a brief but boisterous rally.

They chanted in Spanish "the people united will never be defeated" and held signs with slogans such as "Not Supporting Racism, Not My President" and "Immigrants Make America Great".

Many of those students were members of the "Dreamers" generation, children whose parents entered the US with them illegally, school officials said, and who fear deportation under a Trump administration. 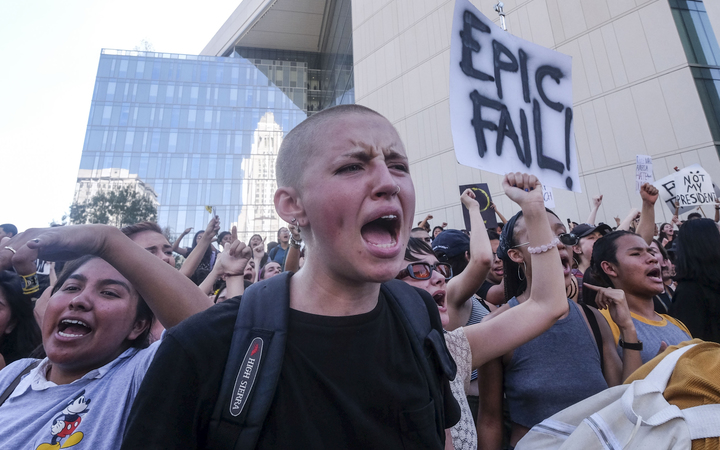 "A child should not live in fear that they will be deported," said Stephanie Hipolito, one of the student organisers of the walkout. She said her parents were US citizens.

There were no immediate reports of arrests or violence.

Smaller groups of students walked out of classes in nearby Oakland and Seattle, while several hundred students at the University of Texas protested as well, according to local reports.

so this just happened on my campus #notmypresident #notourpresident pic.twitter.com/mDCX13y4M5

The demonstrations followed a night of protests around the San Francisco Bay Area and elsewhere in the country in response to Mr Trump's political upset. 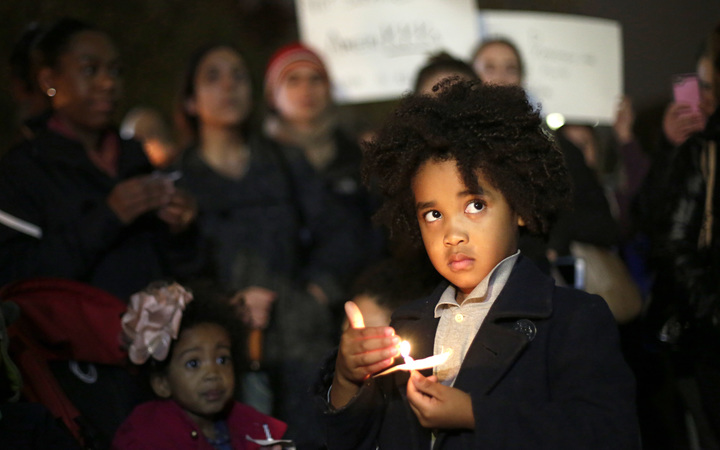 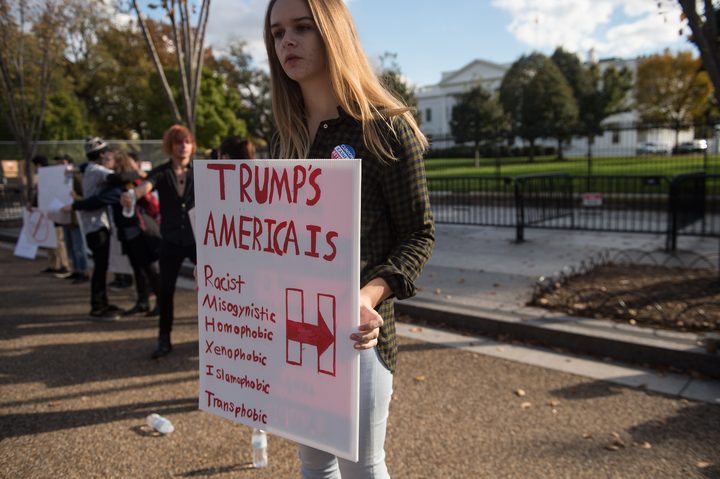 A handful of protesters in front of the White House. Photo: AFP 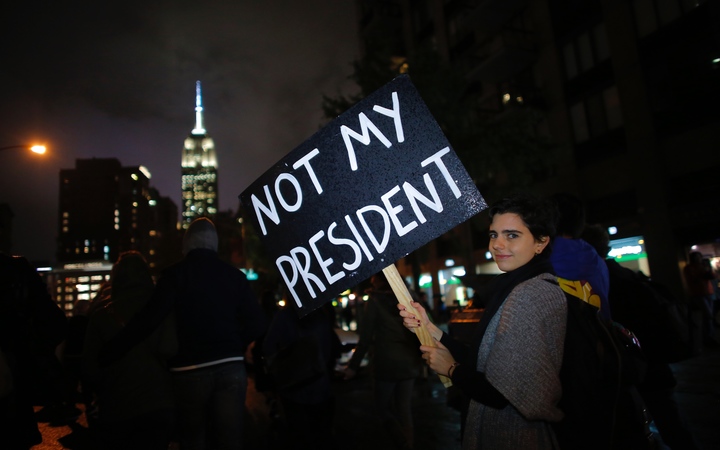 The hashtag #NotMyPresident - used here in real life in NYC - has been shared on Twitter thousands of times. Photo: KENA BETANCUR / AFP 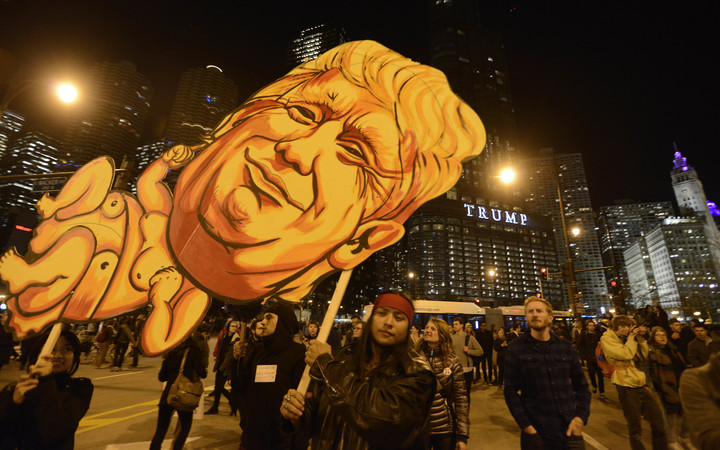 A protest near Trump Tower in Chicago on 9 November (10 November NZT) Photo: AFP