US President-elect Donald Trump gave his victory speech at a New York hotel ballroom flanked by his wife and extended family. So who are the new first family of the United States? 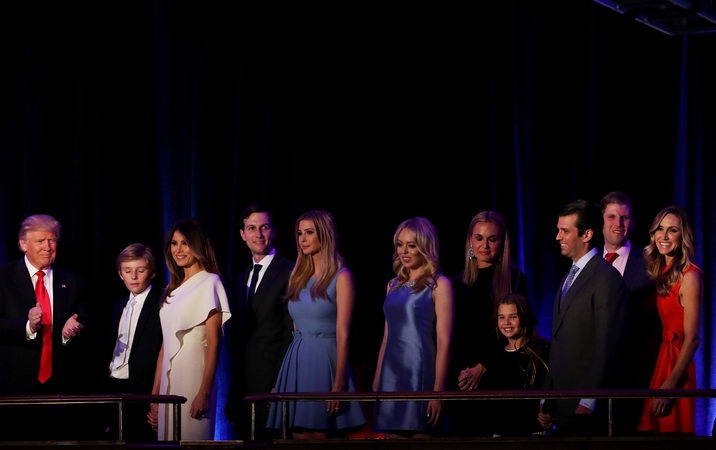 1. Barron Trump is the only child from his current marriage to Melania. Although he has made brief appearances on the campaign trail, the 10 year old has been mostly kept out of the spotlight. He plays golf with his father and is reported to be fluent in Slovenian, his mother's native language.

2. Melania Trump, a former model born in Slovenia, married Donald Trump in January 2005. She stood by her husband after video footage emerged during the campaign in which he boasted about groping women. In July 2016 she made headlines after making a speech at the Republican National Convention, which she was accused of plagiarising from one made by Michelle Obama in 2008. A Trump campaign speechwriter later took the blame. In an October interview with CNN, she was asked what she would change about her husband. She replied: "His tweeting."

3. Jared Kushner is the husband of Ivanka, Mr Trump's eldest daughter. Mr Kushner is the son of a prominent New York property developer and has been the owner of the weekly Observer paper in New York for 10 years. He more recently made moves to set up a Trump TV network. Mr Kushner, who is Jewish, is reported to have angered members of his own family when he wrote a defence of Mr Trump's use of the Star of David in a tweet attacking Hillary Clinton. Writing in his own newspaper, he said: "My father-in-law is not an anti-Semite". He continued: "The difference between me and the journalists and Twitter throngs who find it so convenient to dismiss my father-in-law is simple. I know him and they don't."

4. Ivanka Trump is perhaps the best-known of Mr Trump's children, the only daughter of his marriage to Ivana, his first wife. A model in her early years, she is now a vice-president at The Trump Organization and was also a judge on her father's reality TV show The Apprentice. She converted to Judaism after marrying Jared in 2009. In a speech to the Republican National Congress, she backed her father to support women's rights. "As a mother myself, of three young children, I know how hard it is to work while raising a family. And I also know that I'm far more fortunate than most. American families need relief. Policies that allow women with children to thrive should not be novelties, they should be the norm."

5. Tiffany Trump is Mr Trump's daughter by his second wife Marla Maples, a former actress and TV personality. She is an avid user of both Twitter and Instagram, where her posts depict a glamorous lifestyle. She kept a relatively low profile during the election campaign but earned her father's praise for her "fantastic" convention speech, in which she said her father was a "natural-born encourager".

6. Vanessa Trump, nee Haydon, married Donald Trump Jr in November 2005. The couple have five young children, including Kai, aged eight (pictured). Vanessa began modelling as a child and once dated Leonardo DiCaprio. She serves on the executive committee of her brother-in-law Eric's charity foundation. She keeps a gun at home - and according to an interview with SilencerCo, a company that makes gun silencers, she also has a permit to carry a concealed weapon and shoots regularly.

7. Kai Trump is the eldest of Vanessa and Donald Jr's five children.

8. Donald Trump Jr is Mr Trump's eldest child. Now executive vice-president of The Trump Organization, he married Vanessa Haydon after being introduced to her at a fashion show by his father. His rise has not been free from controversy. His, and brother Eric's, taste for hunting big game was criticised after photos emerged showing them posing with dead animals including a leopard and a crocodile. Donald Jr was also pictured holding the severed tail of an elephant.

9. Eric Trump is the third child of Mr Trump's marriage to Ivana. Like his siblings, he is also an executive vice-president of the Trump Organization. He is president of the Trump Winery in Virginia and oversees Trump golf clubs. In 2006, he also set up the Eric Trump Foundation, which has pledged $28m to a research hospital which helps children battling life-threatening diseases. Like his brother, Donald Jr, Eric was criticised over a hunting trip to Zimbabwe in 2010. He may have broken the law on election day by tweeting a picture of his ballot paper, saying it was an "incredible honour to vote for my father."

10. Lara Yunaska, a former TV producer and keen equestrian, married Eric in 2014. She broke both her wrists horse-riding two weeks before their wedding, at which Jared Kushner officiated. The couple have no children, but do have a dog. As an animal welfare advocate, it is not known what Lara makes of her husband's hunting hobby. She is also involved in the Trump Foundation, said to be one of the largest private charities in the US. Lara told Fox News on 6 November: "Women are highly offended that a candidate like Hillary Clinton thinks she can get our vote simply because we are the same gender… It's ridiculous, it's insulting, and it's offensive".