Hillary Clinton has conceded the White House race and says she hopes Donald Trump will be a successful president for all Americans.

The Republican candidate won the race to the White House after a long and tumultuous campaign. Though not all the results are declared, Mr Trump has an unbeatable lead in electoral college votes.

Mrs Clinton conceded her election loss to Donald Trump and said she had offered to work with the president-elect.

"Last night I congratulated Donald Trump and offered to work with him on behalf of our country. I hope that he will be a successful president for all Americans," Mrs Clinton told supporters and staff at a Manhattan hotel.

"This is not the outcome we wanted or we worked so hard for, and I'm sorry that we did not win this election for the values we shared and the vision we hold for our country," she said to cheers.

"Donald Trump is going to be our president. We owe him an open mind and the chance to lead." 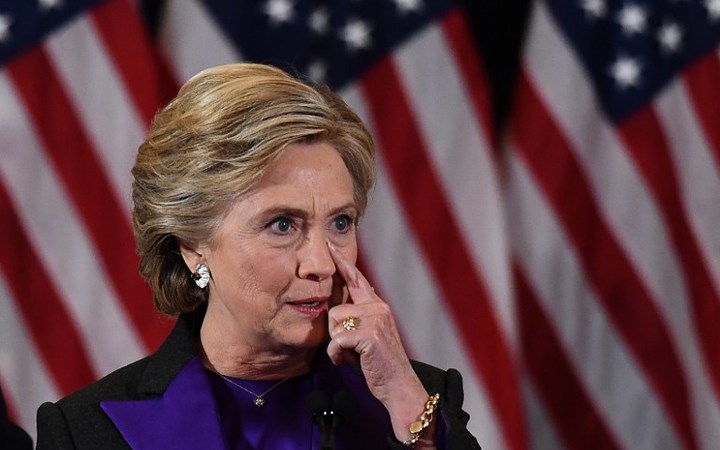 Hillary Clinton told women supporters nothing had made her prouder than to be their champion. Photo: AFP

Mrs Clinton, 69, acknowledged the election results were painful and that she was disappointed.

"This is painful and it will be for a long time," Mrs Clinton said. "But I want you to remember this: Our campaign was never about one person or even one election. It was about the country we love and about building an America that's hopeful, inclusive and big-hearted.

"To all the women ... who put their faith in this campaign and in me ... nothing has made me prouder than to be your champion.

"We have still have not shattered that highest and hardest glass ceiling, but some day, someone will, and hopefully sooner than we might think right now."

The rule of law, equal rights and freedom of worship must be respected and defended, she said, and the responsibility of citizens was to continue to build a fairer America.

"We are stronger together and will go forward together. And you should never, ever regret fighting for that."

Before Mrs Clinton took the stage, running mate Tim Kaine told supporters she had been a great history maker.

Mrs Clinton had chosen not to make a concession speech overnight, instead sending campaign chairman John Podesta out to tell her supporters waiting at a convention centre in Manhattan to go home.

President Barack Obama phoned Donald Trump to congratulate him on his victory and invited him to the White House for a meeting on Thursday, the White House said in a statement.

Despite losing the state-by-state electoral battle that determines the US presidency, Mrs Clinton narrowly led Mr Trump in the nationwide popular vote, according to US media tallies.

It would mark the second time in 16 years that a Democratic candidate lost the presidency despite winning more votes than the victor. In 2000, Democrat Al Gore got more votes than Republican George W. Bush.