New data released by the World Meteorological Organisation shows that the five years from 2011 to 2015 were the warmest on record. 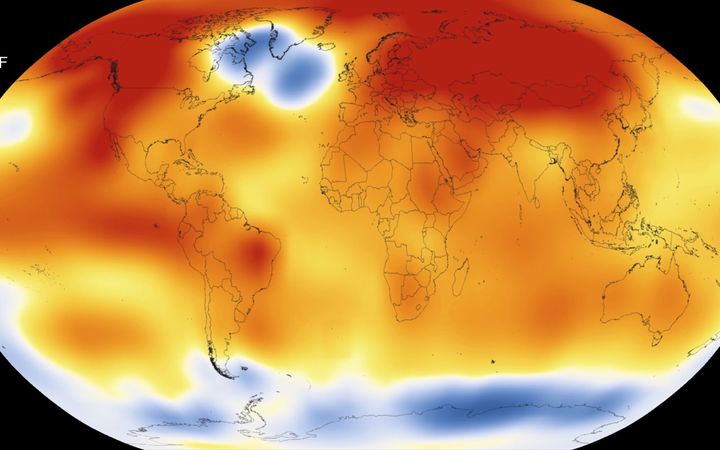 A data visualisation from NASA from January 2016 shows that 2015 was the warmest year since modern record-keeping began in 1880. Photo: AFP/NASA Scientific Visualization Studio/Goddard Space Flight Center

Some studies found the burning of fossil fuels had increased the probability of extreme heat by 10 times or more, it said.

The authors said 2016 was likely to break the record for warmest year.

In their report on the global climate between 2011 and 2015, the WMO authors said that the world's temperature was 0.57° Celsius above the long-term average, which they define as being between 1961 and 1990.

The five-year period was the warmest for all continents except Africa.

Throughout these years, temperatures over most of Europe were more than one degree above the long-term trend.

This was also the case in the Asian part of the Russian Federation, over much of the Sahara and Arabian regions, parts of South Africa, southwest US and the interior of Brazil. The mercury even reached three degrees above the average on the Arctic coast of Russia.

"This report confirms that the average temperature in 2015 had already reached the 1°C mark. We just had the hottest five-year period on record, with 2015 claiming the title of hottest individual year. Even that record is likely to be beaten in 2016."

The rise in temperatures is linked directly to the increase in greenhouse gas levels in the atmosphere.

In 2015, the annual mean concentrations of carbon dioxide were at the symbolically important level of 400 parts per million (ppm), having grown by between 1.9ppm and 2.99ppm between 2011 and 2015, the WMO said.

The new report highlighted the human fingerprint in these emissions and the link to extreme weather events by looking at academic literature in the Bulletin of the American Meteorological Society.

"Of 79 such studies published by [the bulletin] between 2011 and 2014, more than half found that anthropogenic climate change contributed to the extreme event under consideration," the new report says.

The review said the most consistent influence of the use of fossil fuels on the climate has been on the probability of extreme heat. Some studies showed that the probability had increased by ten times or more.

Among the heat events that the report highlighted include the record high seasonal and annual temperatures in the US in 2012 and in Australia in 2013.

Other significant events the WMO believed were linked to warmer temperatures included the East African drought in 2010-2011, which caused an estimated 258,000 excess deaths. They also pointed to heat waves in India and Pakistan in 2015 that claimed more than 4100 lives.

"The effects of climate change have been consistently visible on the global scale since the 1980s: rising global temperature, both over land and in the ocean; sea-level rise; and the widespread melting of ice," Mr Taalas said.

"It has increased the risks of extreme events such as heatwaves, drought, record rainfall and damaging floods," he said.