It has formally submitted its emissions reduction target of 30 percent below 2005 levels by 2030.

The agreement, which was struck in Paris last December, aims to keep global temperature rises to well below 2°C.

In order for it to come into force, 55 countries, making up 55 percent of global emissions, need to ratify the agreement.

India ratified the deal at the weekend - the 63rd country to do so - and pushed the emissions threshold to 52 percent.

European Parliament has backed the ratification overnight - which means national ministers can now ratify the agreement on behalf of the EU later this week, meaning both thresholds will be met.

Climate Change Minister Paula Bennett said New Zealand wanted to be part of the first tranche of countries pushing the agreement through.

"We won't be enough to tip it over 55 percent, we are relatively small in the scheme of things, sort of 0.2 percent really, so we're really low, but I think it's really important to show that we are committed and ratifying early.

"This really does show a commitment." 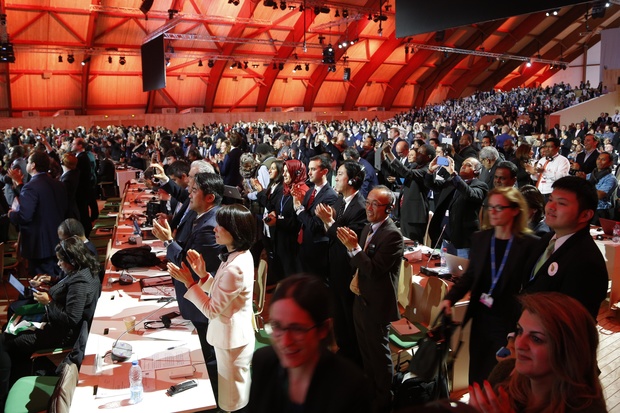 Delegates at the UN Climate Change Conference break into cheers as the Paris Agreement is adopted. Photo: AFP

However, she said New Zealand's target of reducing emissions to 30 percent below 2005 levels by 2030 was very ambitious.

"We're not going to meet it unless we make changes.

"At the moment we've got a number of pieces of work going on where we really start getting into the nuts and bolts of how we reduce our emissions and play our part worldwide," Mrs Bennett said.

The Foreign Affairs, Defence and Trade select committee fast-tracked its consideration of the Paris Agreement to ensure New Zealand could ratify the deal quickly.

In the report, released yesterday, the committee said New Zealand would need to make some law changes to comply with the agreement, but those would not be needed until closer to 2020 when the agreement took effect.

In their minority report, Labour and the Greens said they supported the move to ratify the deal, but were not happy the report did not acknowledge all the current pledges to reduce greenhouse gas emissions submitted by countries were not enough to reach the goal of the agreement - to restrict global warming to below 2°.

They also said New Zealand's target was not ambitious enough and were concerned there was currently no integrated across-government approach to addressing climate change.

Both parties recommended the implementation of an independent climate commission, which was advocated by a number of submitters.