President Barack Obama has warned that the fate of the US republic - and the world - is at stake in the election. 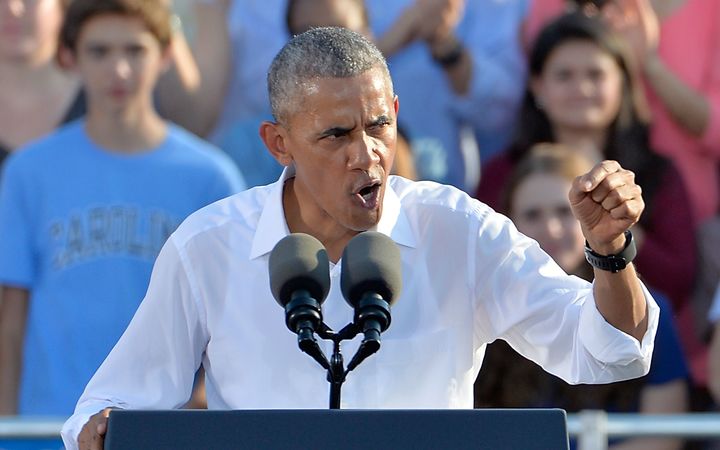 Mr Obama has urged Democrats of all ethnic backgrounds to get out and vote for Hillary Clinton, and said her Republican opponent, Donald Trump, was a threat to hard-earned civil rights.

"The fate of the republic rests on your shoulders," he told supporters at a rally in the key battleground state of North Carolina.

"The fate of the world is teetering and you, North Carolina, are going to have to make sure that we push it in the right direction.

He said Mrs Clinton had become "unhinged" in recent days.

FBI investigations should not be based on "innuendo" - Obama

The FBI is now investigating new emails that may be linked to its probe into Mrs Clinton's private email server.

The agency's director, James Comey, has faced a fierce backlash for announcing the move just 11 days before the presidential election.

Earlier, Mr Obama implicitly criticised him over the inquiry.

In an interview with website NowThisNew, published on Wednesday, Mr Obama said US investigations should not operate on the basis of "innuendo" or "incomplete information".

Mr Obama's remarks were his first public comments since Mr Comey's announcement on Friday that the FBI had discovered a new batch of emails that might or might not be relevant to an earlier, closed investigation into Mrs Clinton's handling of classified information.

It emerged in March 2015 that Mrs Clinton had been breaking federal rules by operating a private email server while she was Secretary of State from 2009 to 2013.

Her lawyers combed through the server and provided the state department with 30,000 work-related emails, but her campaign deleted another 33,000 messages, saying they were personal in nature.

Mr Comey concluded in July that Mrs Clinton had been "extremely careless" in handling classified information, but there were no grounds for any charges.

The latest emails were found in a separate investigation into allegations that former congressman Anthony Weiner sent illicit text messages to a 15-year-old girl in North Carolina.

Mr Weiner is married to one of Mrs Clinton's closest aides, Huma Abedin.

The FBI has reportedly obtained a warrant to search the cache of emails belonging to Ms Abedin, which are believed to have been found on her estranged husband's laptop.

There are reportedly 650,000 emails to search through on the laptop, but it is unclear who sent or received the emails or what they were about.

Democrats have angrily demanded that the embattled Mr Comey rapidly make public what the agency knows about the new email trove.