A deep tunnel, booby trapped with an improvised explosive device, burrows under houses at the entrance to the village. Nearby, an anti-personnel mine lies half buried in a dirt road.

Residents began returning on Wednesday to the village of Sheikh Amir on the road to Mosul, recaptured by advancing Kurdish fighters in the early days of the biggest advance that has been launched against Islamic State (IS). 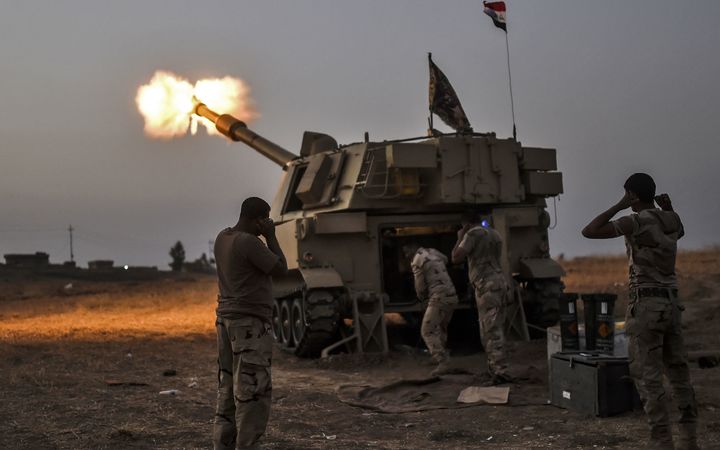 Iraqi forces positioned some 35km from Mosul fire towards the village of Al-Muftuya. Photo: AFP

They found a village rigged with explosives and dug in with elaborate underground defences, abandoned by the Islamists who have retreated closer to Mosul, 30km to the west.

Three days into the assault on Mosul, US-backed government and Kurdish forces are steadily recovering outlying territory before the big push into the city itself, expected to be the biggest battle in Iraq since the 2003 US-led invasion.

Much of Sheikh Amir had been torn down, including the house of Abbas Ahmad Hussein, a 36-year-old resident who fled the village when Sunni militants of IS captured it in 2014.

A Shi'ite, he returned on Wednesday to survey the damage with a small truck to take out any salvageable items, but found nothing left to save amid the wreckage. 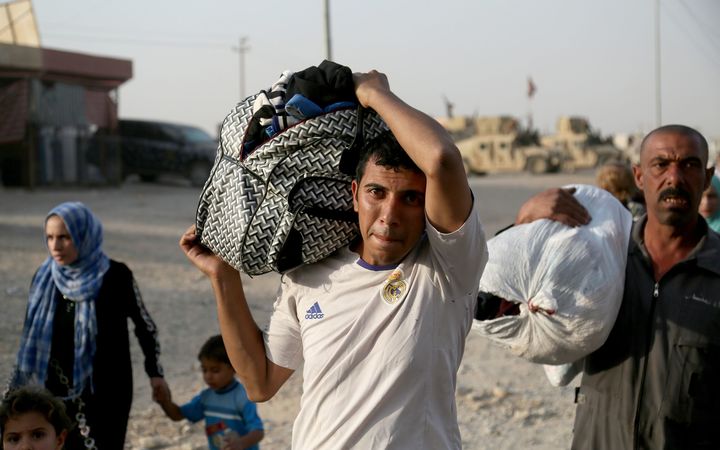 Iraqis fleeing from IS controlled areas of Mosul arrive at Al Qayyarah, a town secured by the Iraqi Army. Photo: AFP

Nearby, red graffiti had been sprayed on a house: "Shi'ites are non-believers."

The village had a mixed population before Islamic State arrived, but Shi'ite houses were destroyed by the militants who consider all Shi'ites infidels who must convert or die.

Mosul, the last major stronghold of Islamic State fighters in Iraq, is five times the size of any other city the militant group has held. Recapturing it would deal a decisive blow to its self-declared caliphate.

But the booby trapped bunkers dug underneath this village, as well as the sectarian invective sprayed on its walls, show how difficult the advance may be. Tens of thousands of pro-government troops will face a tenacious enemy that has had years to prepare and a history of using civilians as human shields. A population of some 1.5 million will be in harm's way.

A powerful Shi'ite paramilitary force said it would support the Iraqi army's offensive by helping secure a town located on one of the main routes out of Mosul.

The Popular Mobilization Force (PMF), a coalition of mostly Iranian-trained Shi'ite militias, said late on Tuesday it would back government forces advancing towards Tal Afar, about 55km west of Mosul.

The PMF includes thousands of battle-hardened fighters with powerful political allies in Baghdad. They have been accused of carrying out killings and kidnappings in other areas freed from Islamic State, although they deny such abuse is pervasive.

Its announcement that could alarm some Sunni civilians in the path of the fighting. This area of northern Iraq is among the most diverse parts of the country, with many ethnic and religious groups fearful of revenge attacks and worried about the balance of power once Islamic State fighters are chased away.

Taking Tal Afar would in effect cut off the escape route for militants wanting to head into neighbouring Syria, but it could also hamper the escape of civilians from Mosul, who must be persuaded that it is safe to leave.

Washington is keen to limit the Shi'ite militias' role. The US-led military coalition providing air and ground support for the Mosul offensive said it would not assist PMF units.

A total of 20 villages were taken from the militants east, south and southeast of Mosul by early Tuesday, according to statements from the two forces.

Islamic State said on Monday its fighters had targeted the attacking forces with 10 suicide bombs and that their foes had surrounded five villages but not taken them. None of the reports could be independently verified.

In Washington, Pentagon spokesman Captain Jeff Davis told reporters on Tuesday that it was known that civilians in Mosul were being used as human shields.

Iraqi officials and residents of Mosul say Islamic State is preventing people from leaving the city but civilians are fleeing from outlying districts and villages.

The United Nations says that in a worst case scenario 1 million people could be displaced by the Mosul campaign, requiring emergency housing and food. It has warned that some 100,000 people may arrive in Syria from the Mosul area.