Forty-four people have been killed in a massive bombing in the Kurdish-controlled city of Qamishli in north-east Syria, Syrian state TV reports. 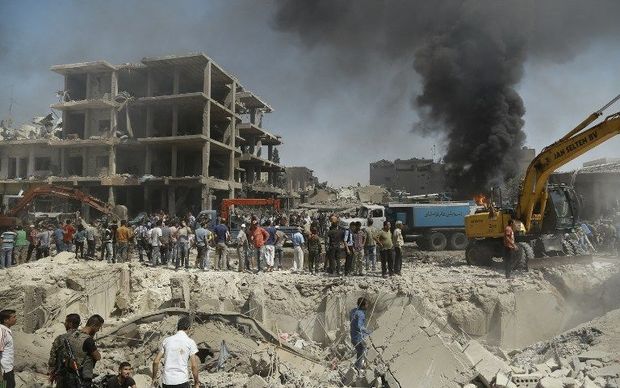 Residents gather at the site of a bomb attack in Syria's northeastern city of Qamishli. Photo: AFP

The blast was caused by a truck bomb which struck near a Kurdish security headquarters, according to a UK-based monitoring group.

Islamic State (IS) has said it was behind the attack, in Hassakeh province, near the border with Turkey.

IS has previously carried out bombings against Kurds in the area. A Kurdish-dominated militia, the Syrian Democratic Forces (SDF), backed by air strikes from the US-led coalition, is spearheading the battle against IS in northern Syria.

The jihadist group said Wednesday's attack was in response to air strikes on the IS-held city of Manbij in north-west Aleppo province, where the SDF is on the offensive.

In a separate development, Syrian forces besieging rebel-held eastern Aleppo city called on anyone with weapons there to lay down their arms, announcing it had severed all supply routes.

Government forces effectively cut off rebel areas, which have held out for four years, after closing in on the strategic Castello Road, the main link to the eastern sector, earlier this month.

The UN has warned about 300,000 people face starvation within weeks unless food is allowed through. 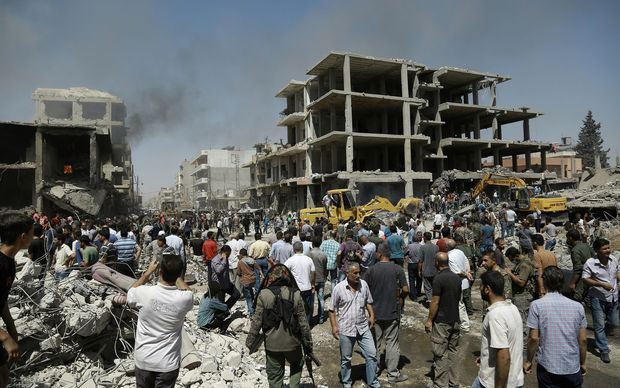 Syrians gather at the site of a bomb attack in Syria's northeastern city of Qamishli. Photo: AFP

State TV showed scenes which it said were the aftermath of the bombing in Qamishli, with pictures of destruction over a large area and plumes of smoke rising into the air.

An eyewitness told the BBC that there were people trapped under the rubble and there were fears the death toll may rise. More than 100 people have been wounded.

IS said on its self-styled Amaq news agency that a suicide bomber had blown up a truck at a local Kurdish police centre and a nearby government building.

The attack was initially reported as a double bombing, but it now appears that the first blast caused a gas tank to explode, according to AFP.

Hospitals in the city are calling for blood donations, the Syrian Observatory for Human Rights (SOHR) monitoring group reports.

The dead include civilians and members of the security forces, it says.

While Qamishli has been targeted before, the group says this is the biggest explosion ever to hit the city.

The blast shattered windows in the Turkish town of Nusaybin, directly across the border, Reuters reports.