Syria's government has accused Turkey, Qatar and Saudi Arabia of being behind a wave of bombings in coastal cities Tartous and Jableh. 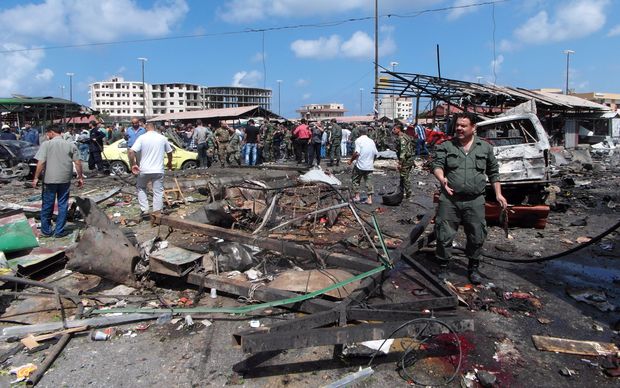 Syrians gather at the site of multiple bombings in the coastal city of Jableh. Photo: AFP

State media said at least 78 people had been killed, while a monitoring group put the death toll at more than 145.

So-called Islamic State (IS) said it was behind the attacks.

The cities, on Syria's Mediterranean coast, are part of the heartland of President Bashar al-Assad and had previously escaped the worst of the civil war.

Sana said letters condemning the bombings had been sent from the foreign ministry to the UN. 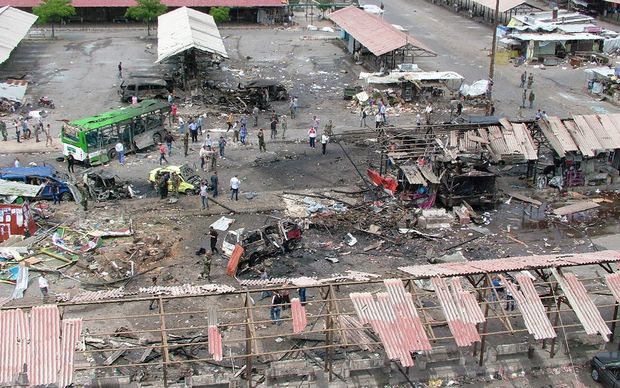 A general view shows the devastation after a bus station in Jableh was bombed. Photo: AFP

"The ministry asserted that these terrorist bombings constitute a serious escalation by the extremist and malicious regimes of Riyadh, Ankara, and Doha," the report said.

"They also seek to derail the Geneva [peace] talks and the cessation of hostilities and truce arrangements, as well as turning attention away from the Syrian Arab Army's achievements in the war against terrorism."

Turkey, Qatar and Saudi Arabia support various rebel forces in Syria but are part of an international coalition battling IS.

Seven co-ordinated bombings happened within minutes of each other in the port of Tartous and in Jableh, further north.

In Tartous, a car bomb was detonated at the city's bus station, Sana said. As rescuers ran to the scene, two suicide bombers also detonated explosives.

Minutes later in Jableh, a car bomb and three suicide attackers struck at a bus station, a power station and a hospital. 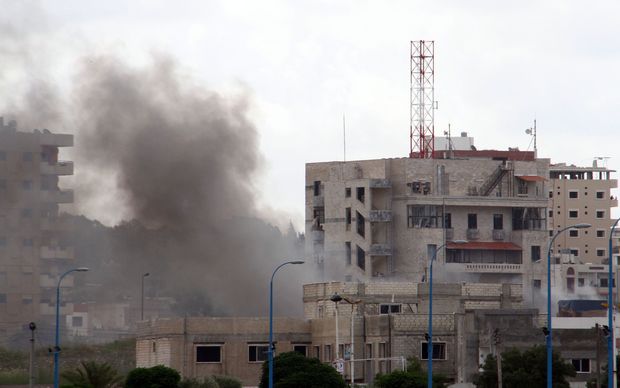 Smoke can be seen from one of three bombs in Tartous on the coast of Syria. Four locations in the city of Jableh, further north, were also bombed. Photo: AFP

One report said a suicide bomber had detonated explosives inside the emergency department of a hospital after helping to carry victims of the first attack there.

Sana said 45 people were killed in Jableh and 33 in Tartous, with many more wounded.

The Syrian Observatory for Human Rights, a UK-based monitoring group which relies on a network of sources on the ground, reported that 97 people died in Jableh and 48 in Tartous.

The Amaq news agency, which is linked to IS, quoted an IS source as saying militants had targeted "gatherings of Alawites", a reference to the heterodox Shia sect to which President Assad belongs.

Russia - a key backer of Mr Assad - has a naval base in Tartous and an air base near Jableh, from where it has conducted air strikes on IS targets across Syria.

Russia expressed concern at the blasts and said they underscored the need to revive the UN-led peace talks, which broke down last month amid mounting violence.

UN chief Ban Ki-moon denounced the attacks, as did the US.

US Secretary of State John Kerry also spoke to his Russian counterpart, Sergei Lavrov, by phone and urged him to put pressure on the Syrian government to stop attacks on Aleppo in the north and Daraya near Damascus.

A state department spokesman said Russia had "a special responsibility" to rein in Syrian government forces.