Bangladesh police continue to question friends and family of seven men suspected over last week's attack on a restaurant in Dhaka, in which 20 hostages were killed. 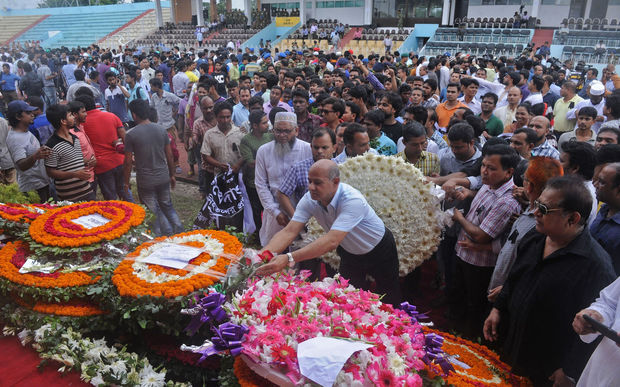 Foreign delegations and ambassadors of various countries stationed in Dhaka place flowers on a memorial as they pay homage to the victims of the hostage-taking. Photo: AFP

Officials said some of the attackers came from wealthy families, having attended top schools or universities in Dhaka or Malaysia, and at least one was the son of a top politician.

The gunmen stormed the Holey restaurant in Dhaka's diplomatic zone in Gulshan late on Friday.

Twenty hostages, two policemen and six suspects were killed in the raid claimed by Islamic State. One suspect was arrested.

Most of the hostages killed were from Italy, Japan, India and the United States.

It was one of the deadliest militant attacks to date in Bangladesh, where Islamic State and al Qaeda have claimed a series of killings of liberals and religious minorities in the last year, while the government says they were carried out by local groups.

Friday's attack marked a major escalation in the scale and brutality of militant violence aimed at forcing strict Islamic rule in Bangladesh, whose 160 million people are mostly muslim.

Islamic State posted pictures of five fighters it said were involved in the atrocity to avenge attacks on muslims across the world.

"Let the people of the crusader countries know that there is no safety for them as long as their aircraft are killing muslims," it said in a statement.

A police officer said the pictures of four of the attackers matched the bodies, although he gave a different name for the fourth. 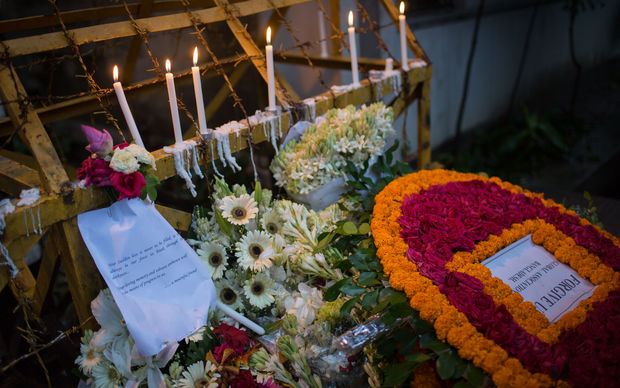 People have paid tribute to the Gulshan attack victims on the street where the attack was carried out. Photo: AFP

"I am stunned to learn this," said Mr Khan, who was now a leader of the Awami League's Dhaka chapter and deputy secretary-general of the Bangladesh Olympic Committee.

"My son used to pray five times a day from a young age. There is a mosque just 25 feet from our home.

"He started going to prayers with his grandfather. But we never imagined this. There was nothing at home, no books or anything to indicate he was leaning that way.

''The shock and suddenness of the event has left me speechless. I am so ashamed and sorry."

Rohan disappeared from the family home in December and his father lodged a complaint in January that he had gone missing, a police officer said.

"When I was searching for my son, I found that many other boys were missing - well-educated boys from good, educated families - children of professionals, government officers. I used to share my sorrows with them," Mr Khan said. 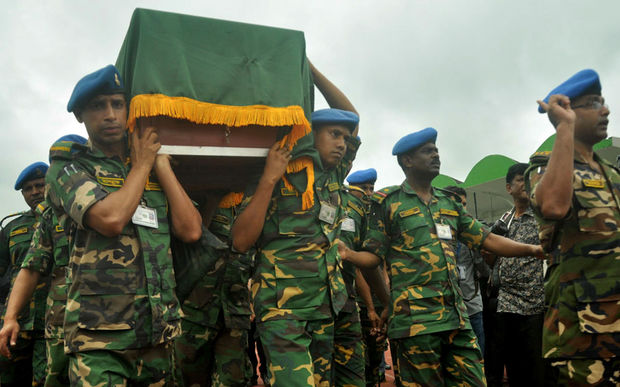 Soldiers carry a coffin during a tribute ceremony to the victims. Photo: AFP

A pattern of elite education

Another dead suspect, Nibras Islam, reportedly attended the campus of Australia's prestigious Monash University in Kuala Lumpur in Malaysia, where the annual fee for a bachelor's degree is about $NZ12,300.

One student there told Reuters that Nibras Islam had appeared a normal student who loved taking photos of himself. He left last year and his social media activity tailed off.

Another suspect, Andaleeb Ahmed, has also been linked to Monash, having been in Malaysia from 2012 to 2015 and later in Istanbul.

Two others went to an elite public school in Dhaka called Scholastica.

Saifaul Islam, another investigator, said police were holding two people suspected of involvement in the assault, including one detained soon after the attack.

"They are currently undergoing treatment and we'd get to know about their role in the incident only after they recover."

Nobody had yet come forward to claim the bodies of the six dead men, he said.

"We are taking DNA samples of them and will see if it matches with the families. We have some suspicions, we know some boys had gone missing over the last two-three months."

Rohan Gunaratna, a professor of security studies at Singapore's Rajaratnam School of International Studies, said the Dhaka gunmen's background may have helped them mount the attack at the Holey Artisan restaurant, popular with the city's well-heeled and foreigners.

"As they were well educated and young, they could blend into and operate in the upmarket diplomatic enclave without evoking red flags," he said.

"The IS [Islamic State] attack team was also technologically savvy and they uploaded the photos during the attack both to IS command cell in Bangladesh and IS central in Syria."

On Monday, hundreds of people gathered in central Dhaka to remember the victims, holding placards in different languages.

One survivor, Gianni Boschetti, described how leaving the cafe to take a phone call saved his life - but he lost his wife, Claudia Maria D'Antona.

"The last time I heard my wife's voice was when she called for me from the inside," Mr Boschetti told La Repubblica.

He hid in the cafe garden for hours. "I saw bodies in a terrible state, from beatings and sharp weapons, but not my wife's. Maybe she didn't suffer," he said.

One eyewitness said hostages were tortured if they could not recite the Koran.

The attack could be a huge blow for Bangladesh's $26 billion garment industry, as fears mount that major retailers could rethink their investments.

Japan's Fast Retailing Co, owner of the Uniqlo casual-wear brand, said it will suspend all but critical travel to Bangladesh and has told staff there to stay home.