The police in Bangladesh say more than 900 people have been arrested in a concerted drive against Islamist extremists after a monastery worker was killed. 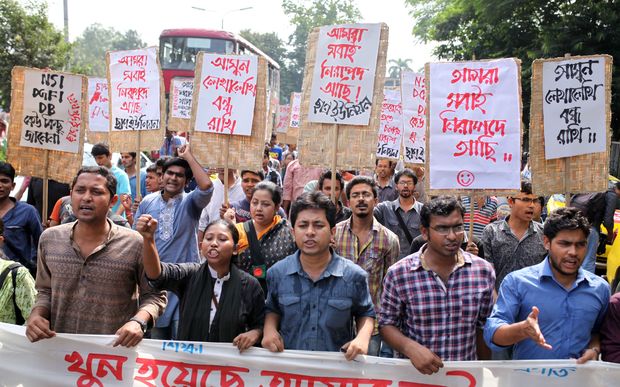 There have been frequent protests in Bangladesh for the government to ensure the security of its citizens since the attacks began. Photo: AFP

Nitya Ranjan Pandey, 60, who had worked at a temple as a volunteer for 40 years, was taking an early morning walk in the northwestern district of Pabna when he was attacked, police said.

He died on the spot after several people attacked him early on Friday, police said.

"There was no eyewitness to the attack as it happened very early in the morning," district police head Alamgir Kabir told AFP.

The killing came days after an elderly Hindu priest and a Christian were hacked to death in attacks claimed by Islamic State.

More than 40 people have been killed since January last year in a wave of attacks, including secular bloggers, academics and gay rights activists.

Islamic State and al Qaeda have claimed responsibility for most of the killings, but the government denied either group had a presence in Bangladesh and said domestic militants were responsible.

No group has said they carried out the attack.

Bangladesh has a majority Muslim population with Hindus making up about 8 percent of the population.