Hillary Clinton is hoping to claim victory in the race for the Democratic presidential nomination after six states have finished holding primaries today. 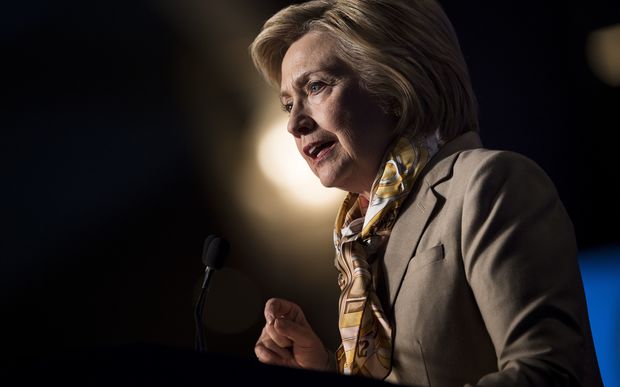 She looks set to win New Jersey but the race could be tighter in the other big prize state, California.

Rival Bernie Sanders insists it is too early to call the result.

Republicans are also voting in the same states, except North Dakota, although Donald Trump has already secured the party's nomination.

His recent criticism of a Hispanic judge was condemned on Tuesday by Republican house speaker Paul Ryan as the "textbook definition of racist comments".

Voting is taking place in Democratic primaries in Montana (27 delegates), New Mexico (43) and South Dakota (25), with a caucus in North Dakota (23). California has 543 delegates and New Jersey 142.

The final primary is in Washington DC on 14 June. It has 45 delegates.

AP says its count has Mrs Clinton on 1812 pledged delegates and 571 superdelegates.

US media organisations say this means she will now become the first female nominee for a major US political party.

Superdelegates are party insiders who can pledge their support for a candidate ahead of the convention but do not formally vote for them until the convention itself.

BBC North America editor Jon Sopel said the AP announcement could actually be a problem for Mrs Clinton, as it may depress turnout in Tuesday's primaries and creates the impression that she has only won because of the superdelegates and not the ordinary voters.

The Democratic Party has a far larger number of superdelegates than the Republicans, meaning a candidate would have to win 58.8% of primary and caucus votes cast under the party's proportional system to win by pledged delegates alone. Mrs Clinton has about 55% of the overall vote so far.

She did not claim victory after the AP announcement, telling supporters in Long Beach, California, on Monday: "We are on the brink of a historic and unprecedented moment but we still have work to do.

"We have six elections tomorrow and we're going to fight hard for every single vote, especially right here in California."

Mrs Clinton received another boost on Tuesday when the influential Democratic politician and House Minority Leader Nancy Pelosi endorsed her for president.

Bernie Sanders is hoping for a victory in California to keep his campaign going to the party convention.

The Vermont senator has commanded huge crowds at his rallies, many of them younger voters, pledging action on income inequality, minimum wages and student tuition fees.

Reacting to the AP announcement, Sanders team spokesman Michael Briggs said the media "is wrong to count the votes of superdelegates before they actually vote at the convention this summer."

He said Mr Sanders would attempt to win back superdelegates.

But the BBC's Anthony Zurcher says Mr Sanders has been running an outsider's anti-establishment campaign that has not generated much enthusiasm among the Democratic power players and long-time party stalwarts who comprise the bulk of the superdelegates.

AP reports White House officials as saying that Mr Obama is preparing to endorse Mrs Clinton in the next few days, although the announcement would come after Tuesday's primaries.

Mr Obama telephoned Mr Sanders on Sunday, AP said. The contents of the call have not been revealed.

Meanwhile, Mr Trump has faced a barrage of criticism from within the Republican Party over his comments last week that Mexican-American US District Judge Gonzalo Curiel was biased against him.

Mr Trump said Judge Curiel, who is overseeing lawsuits against Trump University, would not treat him fairly because he was a Mexican opposed to his plans to build a wall between the US and Mexico.

Mr Ryan said he regretted Mr Trump's comments, saying "claiming a person can't do their job because of their race is sort of like the textbook definition of a racist comment".

But he said it had not affected his decision to back Mr Trump's candidacy. "We have more likelihood of getting our policies enacted with him that we do with [Hillary Clinton]," he said.