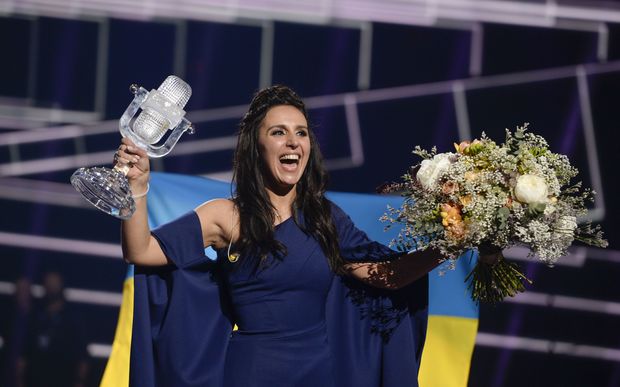 The country's entrant Jamala scored 534 points with her song 1944 about the deportation of Crimean Tatars under Josef Stalin.

Australia finished second with 511 points, while Russia - which was the favourite going into the competition - was third with 491 points.

Jamala is the first ever Crimean Tatar to perform at the contest and caused controversy ahead of the show over her political song.

The song references the year when Stalin deported almost all of the ethnic group from its native region of Crimea in what was then Soviet Russia (later to become part of Ukraine).

The singer had dedicated the song to her great grandmother, who was forced to leave along with a quarter of a million Tatars, as a collective punishment for those who had collaborated during the Nazi occupation.

It had been expected to finish in the top three but in a surprise result beat the Russian favourite.

Russia annexed the Crimean penninsula from Ukraine in 2014.

Collecting her award, an emotional Jamala thanked Europe for their votes, adding: "I really want peace and love to everyone".

Speaking about her win backstage after, the singer said: "It's amazing. I was sure that if you talk about truth it really can touch people".

A new scoring system was introduced this year, providing separate scores for each country's jury and public votes, rather than combining them as in previous years.

At the half-way point after the juries' votes had been counted, Australia - which had been invited back to perform after last year's 60th anniversary celebrations - topped the scoreboard with 320 points and a firm lead over Ukraine's 211 points.

But its entry, Sound of Silence by Dami Im, failed to strike the same chord with the public, receiving the fourth-most votes.

The new scoring system highlighted the disparity between the preferences of the juries and the public.

It allowed Poland, which was in penultimate place with seven points from the jury, to leap to eighth when the public's 227 points were taken into account.

It also meant the UK, which had been placed 17th after the jury vote with 54 points, was pushed down to 24th out of 26 when the public's mere eight points were added.

British chat show presenter Graham Norton, who provided commentary to viewers watching in the UK, paid tribute to his predecessor Sir Terry Wogan during the contest.

He recalled Sir Terry, who died in January, advising him not to drink anything alcoholic until the ninth song had been performed.

"I would urge you at home to raise a cup, a mug, a glass and give thanks to the man who was, and always will be, the voice of Eurovision," he said as the ninth competitor began.

This year's contest took place at the Ericsson Globe arena in Stockholm and was hosted by last year's winner Mans Zelmerlow and Swedish TV personality Mede.

Justin Timberlake performed his new single during the interval of the show, which also included a sketch featuring British actors Sir Ian McKellan and Sir Derek Jacobi as their ITV Vicious characters.