At least 27 people are dead after an airstrike destroyed a major hospital in the Syrian city of Aleppo overnight. 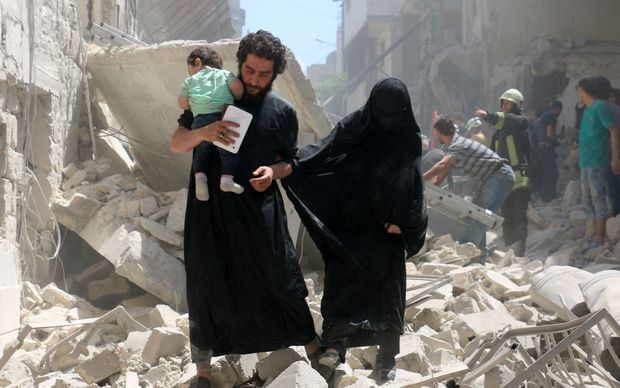 A family walks amid the rubble following an air strike in the Syrian city of Aleppo, on 28 April 28. Photo: AFP

The situation is "catastrophic", after airstrikes on and around a Médecins Sans Frontières backed hospital killed dozens, with more than 30 dead in other attacks, the United Nations said.

And the Red Cross has warned Aleppo is on the brink of a humanitarian disaster with millions of lives at risk.

Red Cross spokesperson Elodie Schindler, who is in Geneva, told Morning Report the airstrike was unacceptable, and the people of Aleppo would not be able to survive for much longer if the fighting continues.

"What we can see is the shocking consequences of this fighting of the recent days in Aleppo. The hospital has been completely destroyed and this is unacceptable."

Médecins Sans Frontières (MSF) said at least 14 patients and three doctors had been killed in the airstrike on al-Quds hospital. 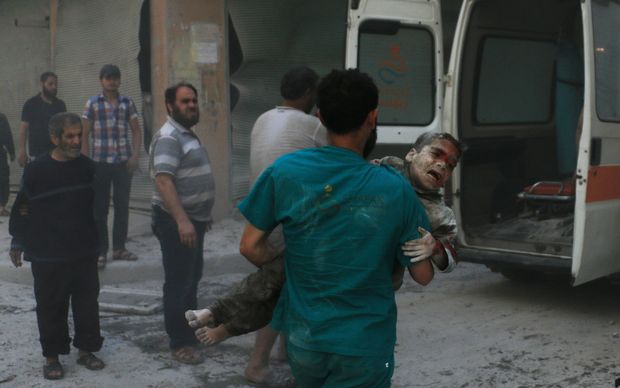 A health workers cares for the injured following the airstrikes. Photo: AFP

Among those was Mohammed Wasim Moaz, one of the city's last paediatricians, MSF said.

MSF representative Aitor Zabalgogeazkoa told the BBC Dr Moaz had worked at the hospital since 2013.

"He kept it going, was always there and always worried about the needs of the people. He was honest and very committed. He worked in conditions you cannot even begin to imagine," Mr Zabalgogeazkoa said.

UN envoy Jan Egeland said the next days would be vital for the humanitarian aid lifeline for much of Syria, while UN envoy for Syria Staffan de Mistura warned the cessation of hostilities agreed between non-jihadist rebels and government forces on 27 February was now "barely alive".

Mr Egeland, the head of the UN humanitarian assistance to Syria, said he had been briefed on "the catastrophic deterioration" in Aleppo over the past two days.

"No one doubts the severity of the situation."

He warned that the humanitarian lifeline for much of the country was at risk.

"I could not in any way express how high the stakes are for the next hours and days.

"So many humanitarian health workers and relief workers are being bombed, killed, maimed at the moment that the whole lifeline to millions of people is now also at stake," Mr Egeland said.

Local sources blamed war planes from the Syrian military or from Russia, which has been supporting the government of President Bashar al-Assad, for the attack.

A military source was quoted on state TV saying: "Such news is merely an attempt to cover up terrorist crimes which target peaceful citizens in Aleppo." 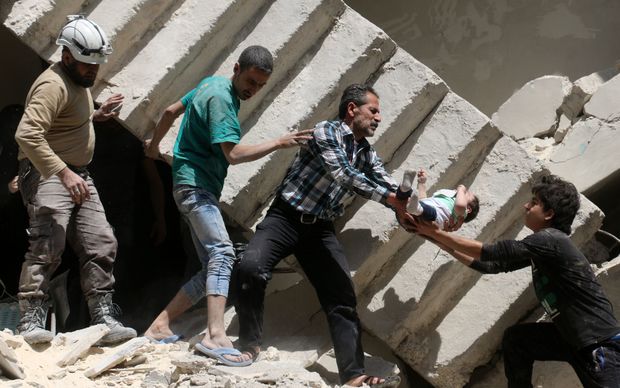 Syrian civil defence volunteers and rescuers remove a baby from under the rubble of a destroyed building. Photo: AFP

An activist at the scene, named Zuhair, told the BBC: "It was an air strike by two rockets, heavy rockets from Russian airstrike.

"Near the hospital, one building on five floors just crumbled and just crashed down and we don't know how many dead will be under these ruins."

However, Russian news agencies quoted the Russian defence ministry as saying it had carried out no airstrikes in Aleppo in the past few days.

US Secretary of State John Kerry said he was "outraged" by the hospital attack.

"It appears to have been a deliberate strike on a known medical facility and follows the Assad regime's appalling record of striking such facilities."

UN Secretary General Ban Ki-moon called on both the US and Russia to exert pressure to stop the violence, and demanded a credible investigation into the hospital attack.

Monitoring groups said at least 20 people were killed in other attacks on rebel-held areas in Aleppo on Thursday, while at least 14 died in rocket strikes on government-controlled neighbourhoods.

The upsurge in violence comes amid reports that the Syrian army, backed by Russian air power, is gearing up for a major offensive in Aleppo.

Separately, the Syrian government reported that 150 United States troops had arrived in the town of Rmeilan in Syria's predominantly northern Kurdish province of Hassakeh, denouncing it as an "illegitimate intervention".